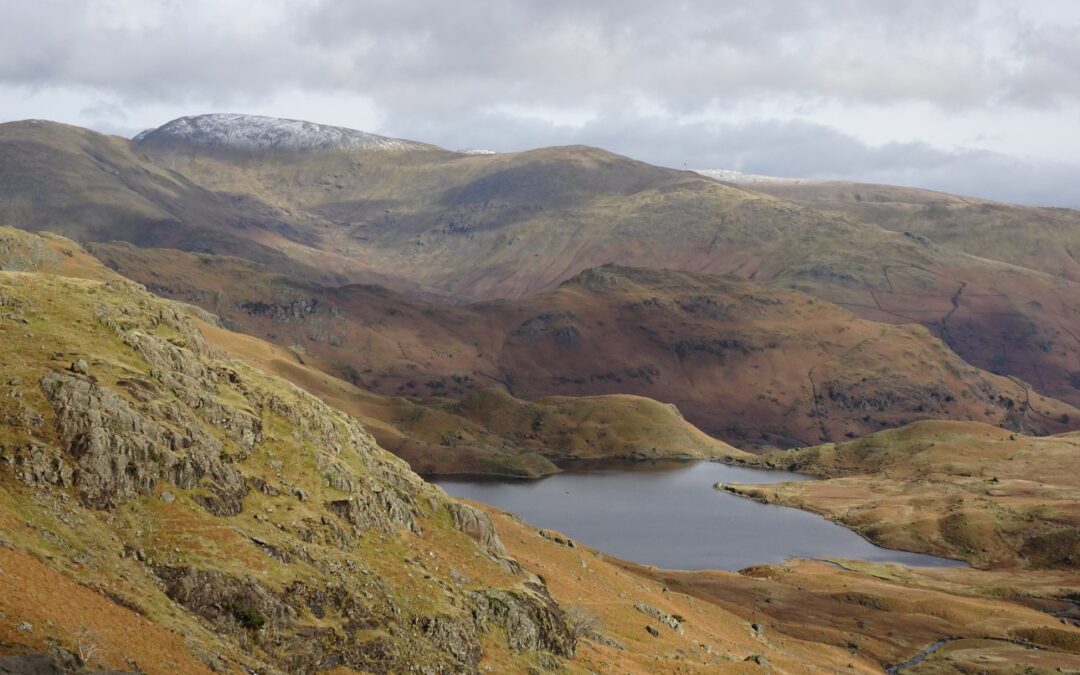 Following what seemed like months of rain it was it was one of those days – just about fine but looking like more rain was on the way. So how about a quick dash out of the door and up to Easedale Tarn and possibly on up to Codale Tarn if it wasn’t too bad. And if it all goes badly wrong straight back down to Tweedies – hopefully quiet now the crowds have thinned slightly. Seemed like a plan.

A good one as it turned out because the sun broke through on arrival at Easedale Tarn and the light, sparkling on all the raging becks, was sensational. That lively early Spring light when the sun shines through air that has been washed spotlessly clean.

A few curios to ponder along the journey beyond Easedale Tarn. There’s some steep and impressive crags, Blea Crag and Eagle Crag, against the light up to the left in the darkness. Eagle is particularly formidable and pretty overhanging, Ive spent some time hanging in space above this one. On my route to the Peregine’s nest that was in use back in the 60’s. My dad Jim Birkett had a license to visit these nests to mark the eggs to make them valueless to egg collectors. But the most noticeable feature hereabouts, as the ascent begins to climb steeply up the rocky slabs that form the headwall of the Easedale basin, is the prominent pyramidal spire of Belles Knot.

It looks a bit like a miniature Matterhorn. And for those who take the scramble up its front face it feels a bit that way too. It’s steep and exposed. Note the spelling of the name – its not Bells Knott – it doesn’t look too much like a bell – it’s Belles Knot. Locally its pronounced Bellies Knot because it resembles the protuberance from beneath the belly of a male sheep – a Herdwick Ram. ie., its willy!

Whilst the path, once a popular and important packhorse route, continues to the col, and then either down to Great Langdale via Stickle Tarn, or on to petite but distinctive Sergeant Man, the way to Codale Tarn bears right across the stream. It’s pronounced locally as Co-dal Tarn. And the traverse along the edge above it is known as Slapestone Edge. As with all high mountain Tarns Co-dal has many moods. Today it was a bit flustered for the most part but the far corner was an idyllic place to eat the sandwiches, have a cup of Rooibos Tea, marvel at the light and take a photograph.

I’ve always enjoyed Rooibos or Red Bush Tea, ever since, when I was in the South African Cederberg Mountains a local, speaking Pigeon English, on a donkey and cart, explained that’s what he had picked all his life and now, since Nelson Mandela had taken charge, the harvest from these withered bushes belonged to the village – he pointed proudly over to a cluster of mud huts. FREEDOM.

Before you gain the main shoulder there’s a substantial sheepfold on the left and because of the proximity of the beck behind it I feel it must have been a washfold. The shoulder, I have to admit I don’t know its local name but I know it’s got one, provides a wonderful feeling of elation with views in every direction. The summit of Tarn Crag lies just to the north of the path and I told Deborah she had to do it if she wanted to tick all the Birkett’s. I just do it for silliness – she says she couldn’t care less about ticking them off (well each to their own)!

As we descended I pointed out the usual burial cists and the Roman Harbour on the edge of Easedale Tarn. All good stuff. Something guaranteed to annoy anyone with even a smattering of common sense, or archeological knowledge, let alone one fully qualified both practically and academically. Just my idea of fun you understand.

At Stythwaite Steps, the crossing over Far Easedale Gill, at the foot of far Easedale there’s a footbridge now but it’s still fun to cross the stepping stones that mainly remain intact. Then before Brimmer Head Farm there’s an old farmstead on the left (now used as a kind of bunkhouse I think). On the stone door lintel a date and initials which we always guess at before arrival. This time I got it right – the date is 1738 and the initials are ESP (for Extra Sensory Perception?).

The idyllic setting is perfect and immediately on from the building stands one of the most impressive pine trees I know. It’s huge girth and multitude of stout branches make it most distinctive. Maybe it’s a Douglas Fir. And just down the way, in the same little stone walled field, a really fine and mature Monkey Puzzle Tree. I wonder if they were planted by ES and PS when they built the farmstead? Living creatures, witness to hundreds of years of life and death, of cyclic change, these tree have experienced and witnessed so much. It makes me feel both enlivened and humble when I walk by. What a privilege to see their beauty, feel their power.

Back down to Grasmere Village. It’s reasonably quiet. Praise be. Time for a quick one in Tweedies.

For images of the tarns, in all four seasons, and more musings, see THE GRASMERE YEARBOOK (available from this website – postage free in the UK). 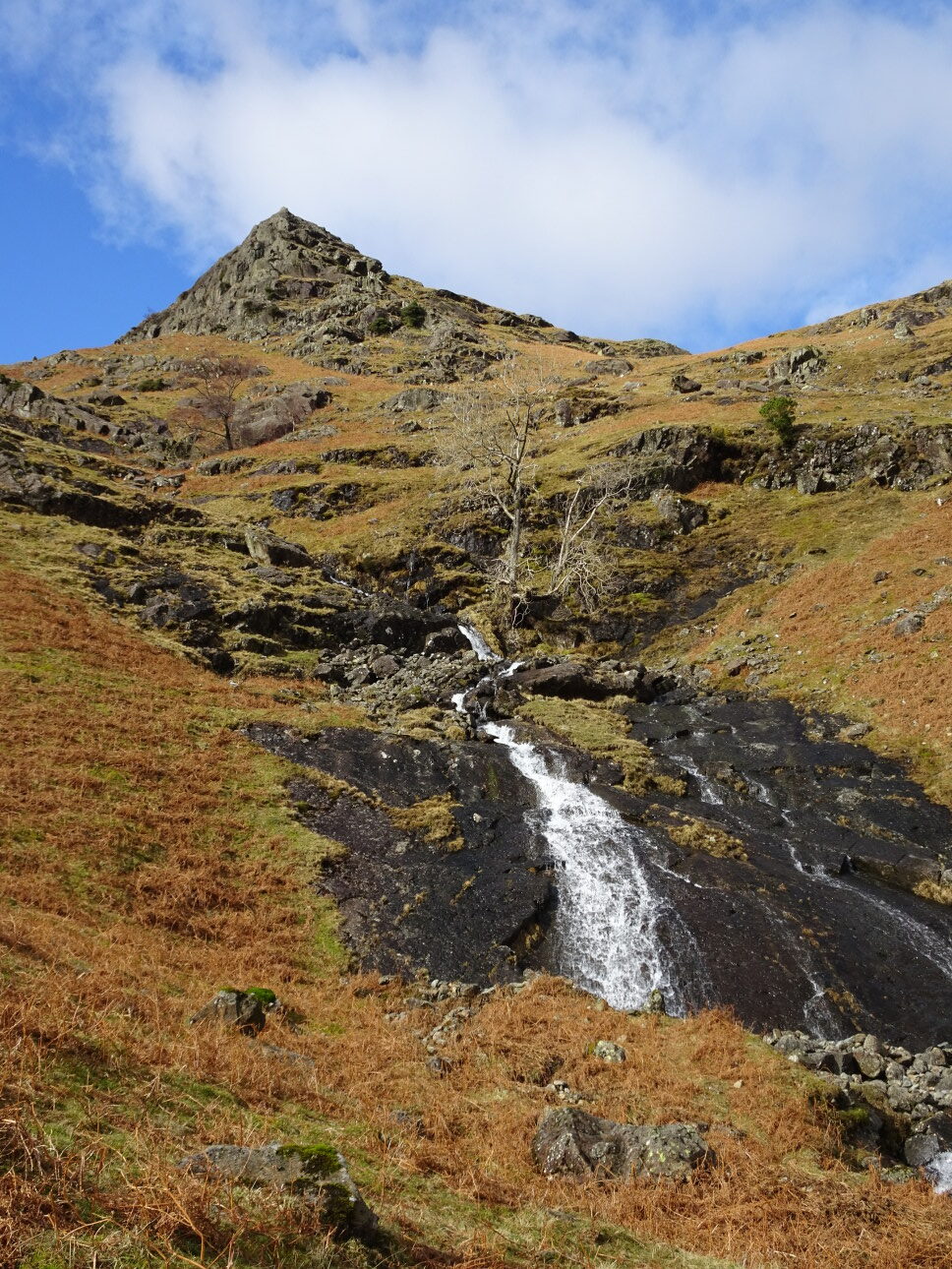 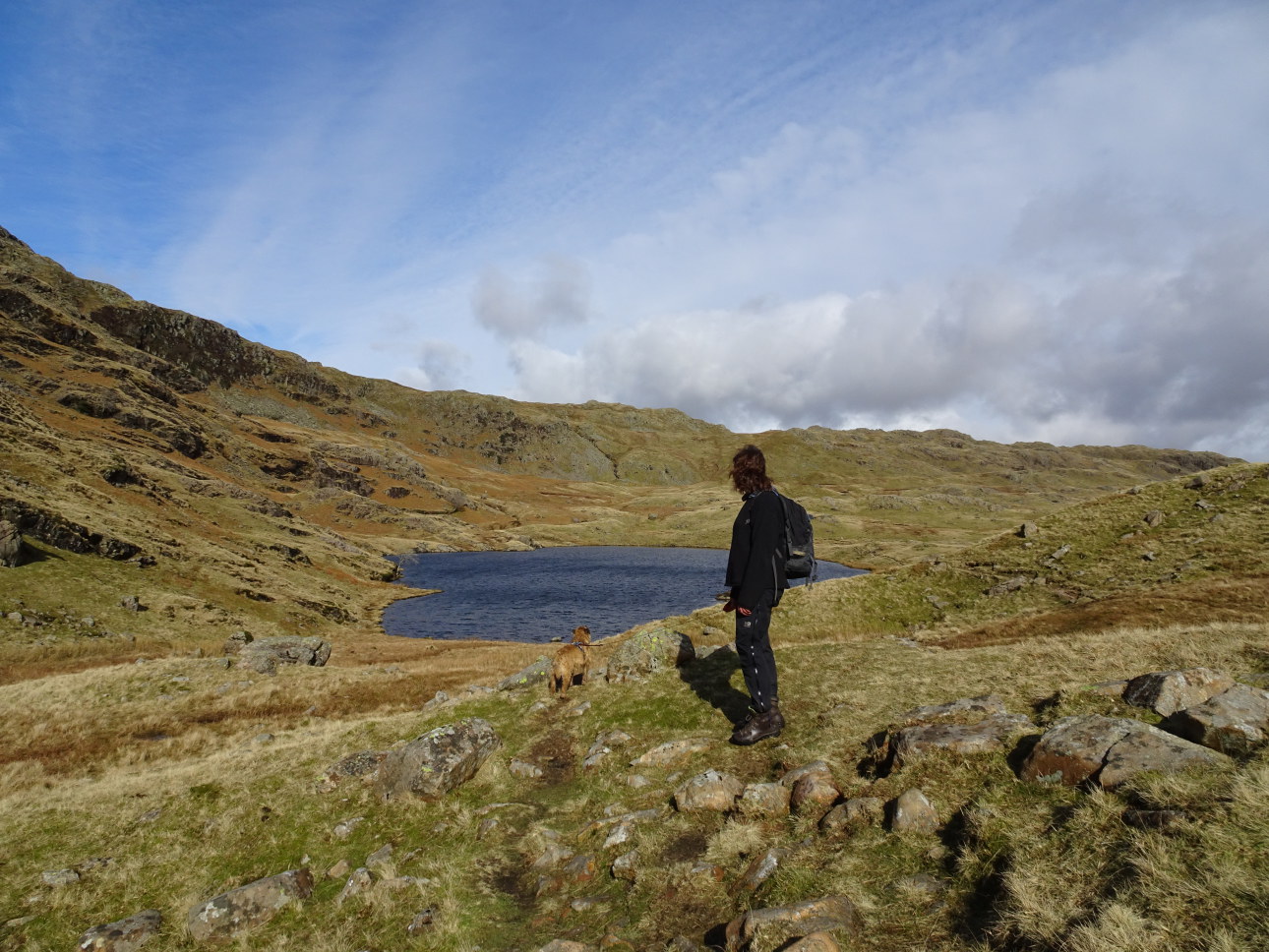 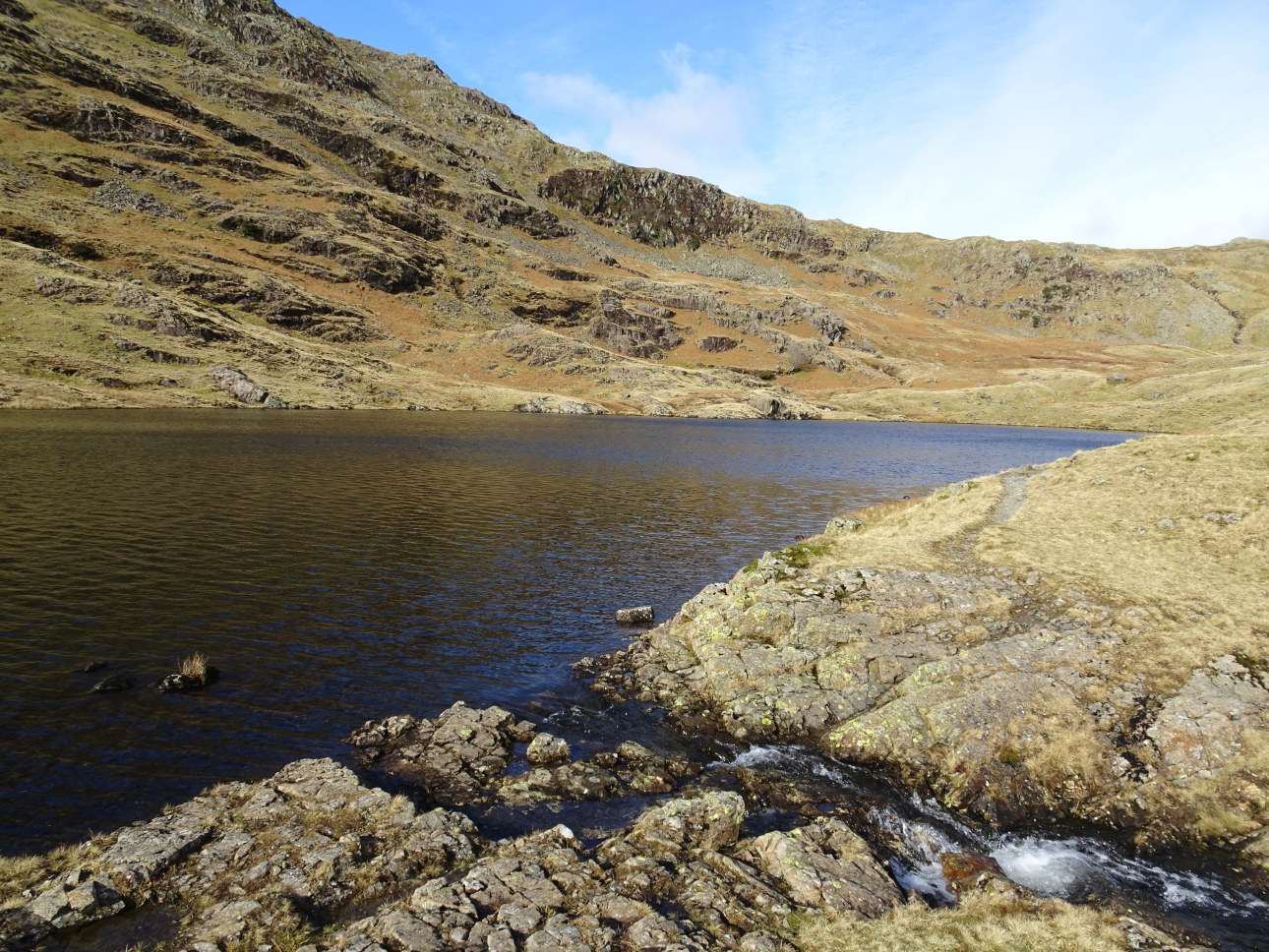 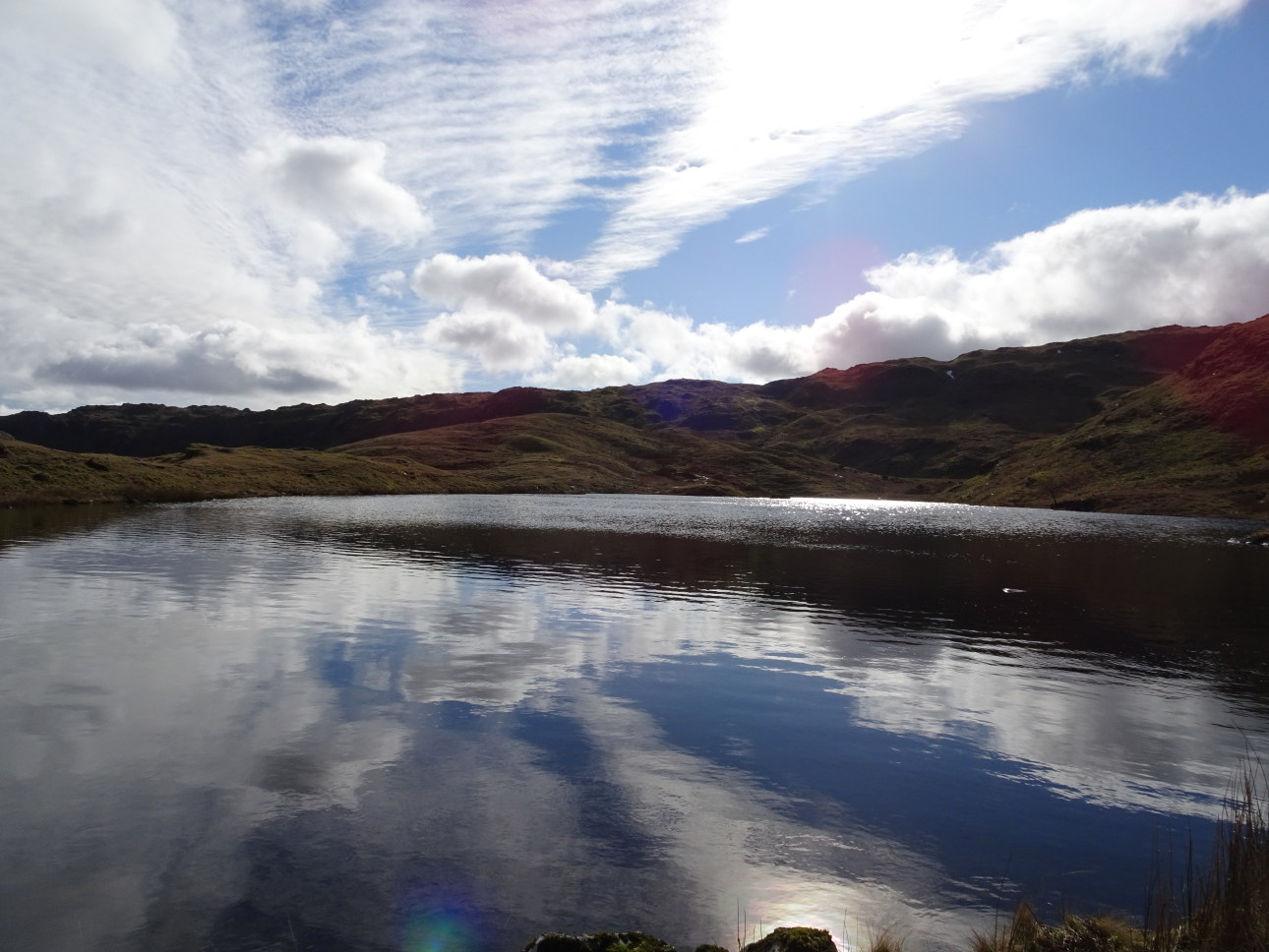 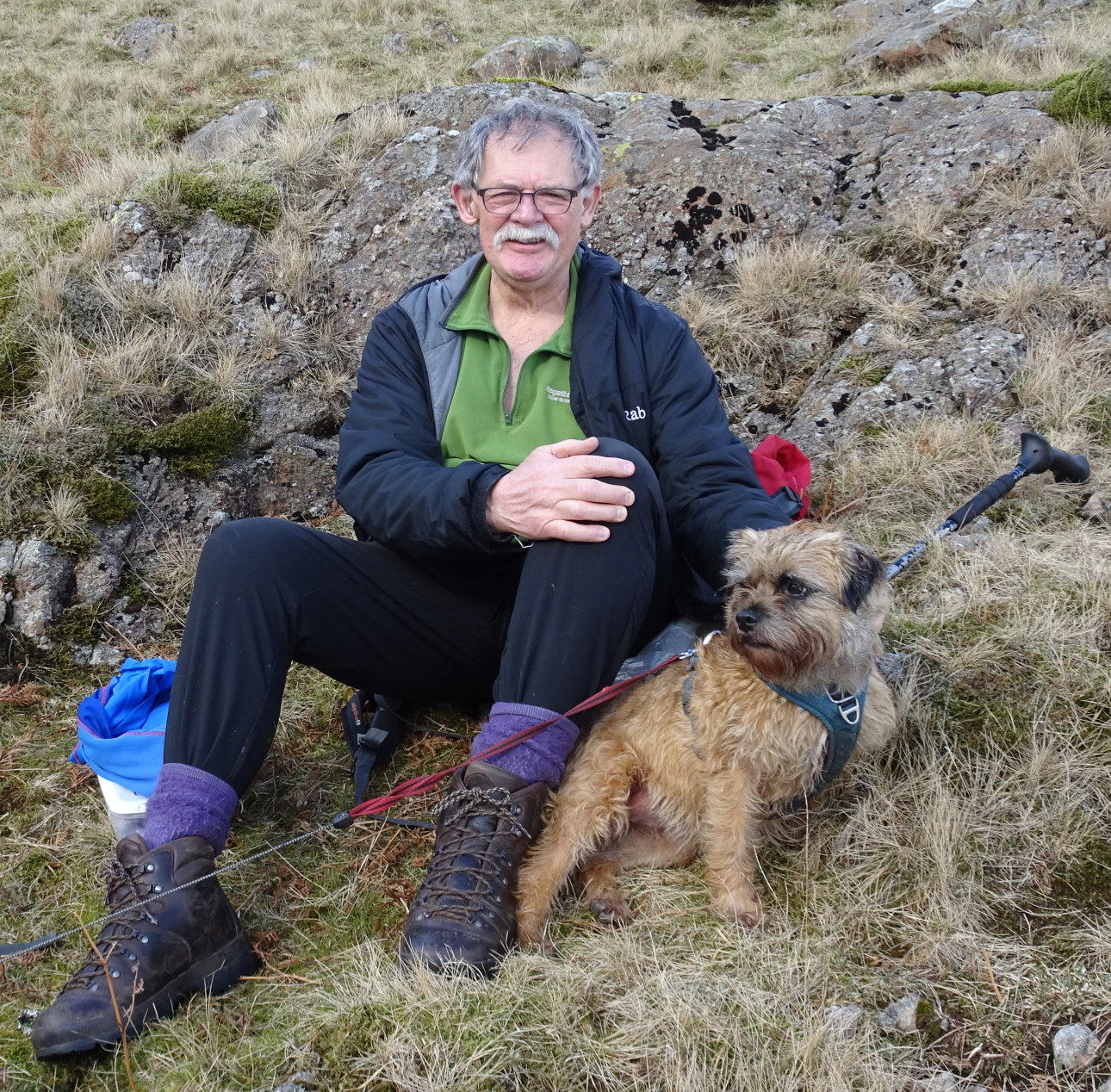 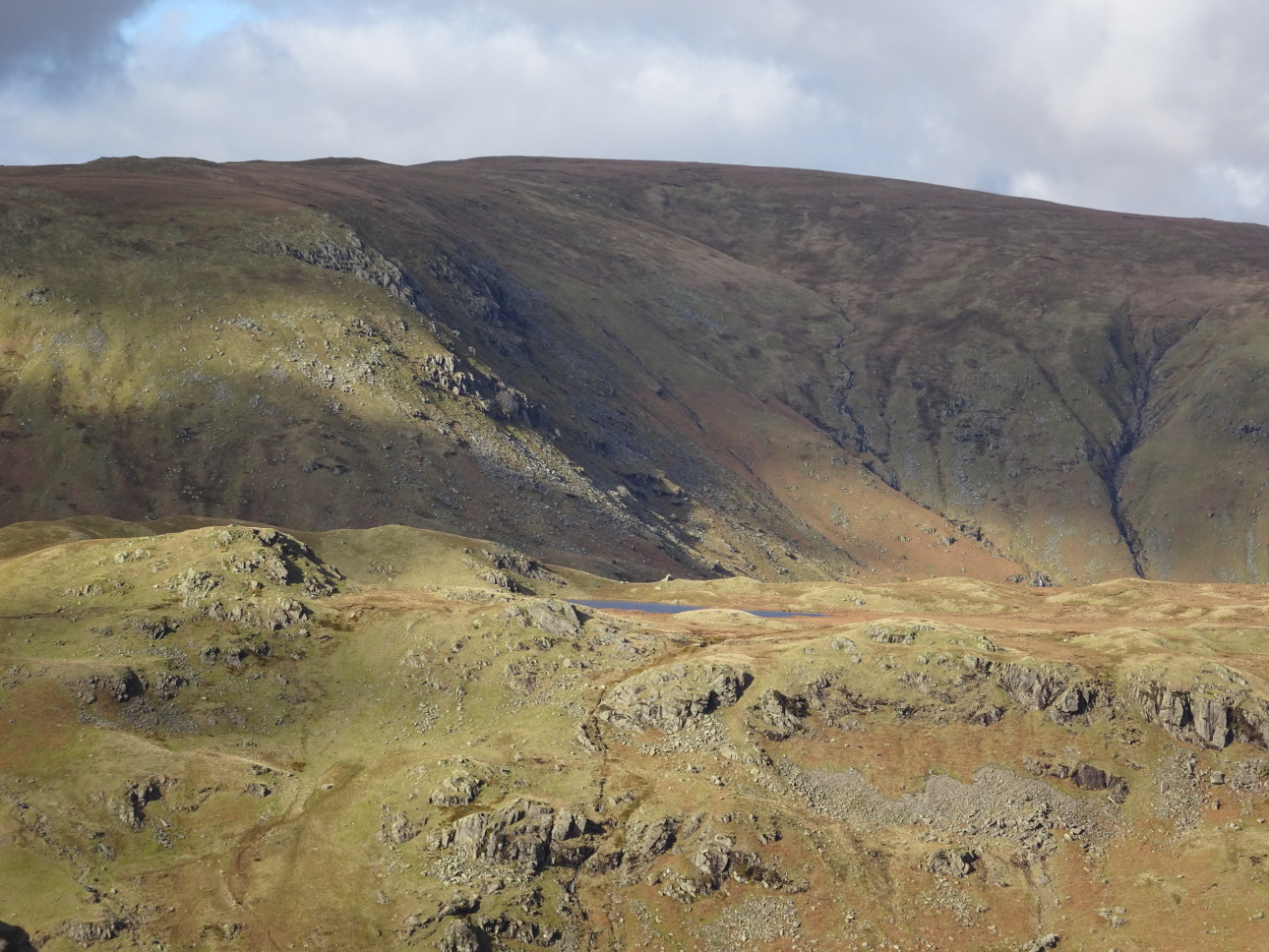 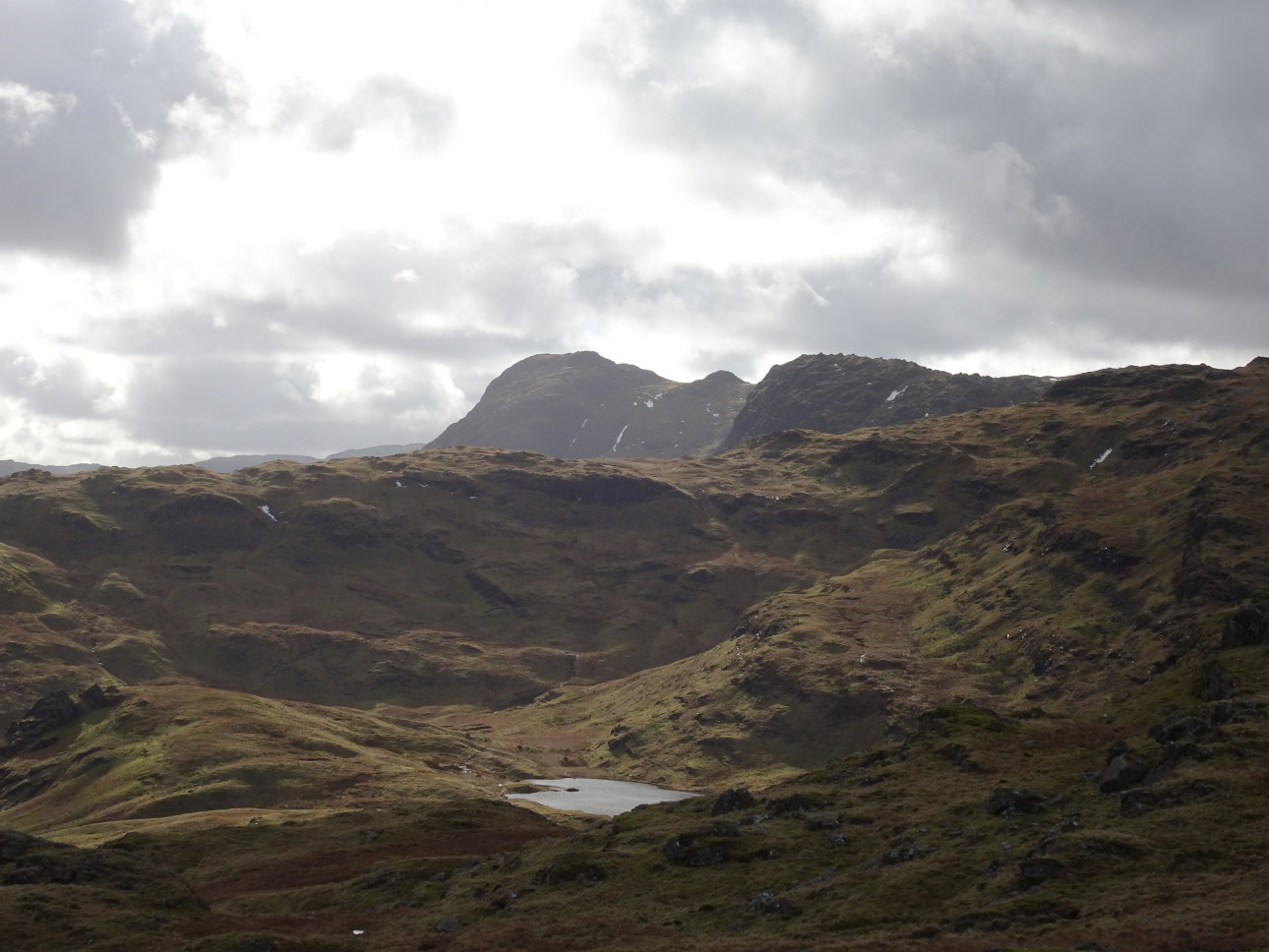 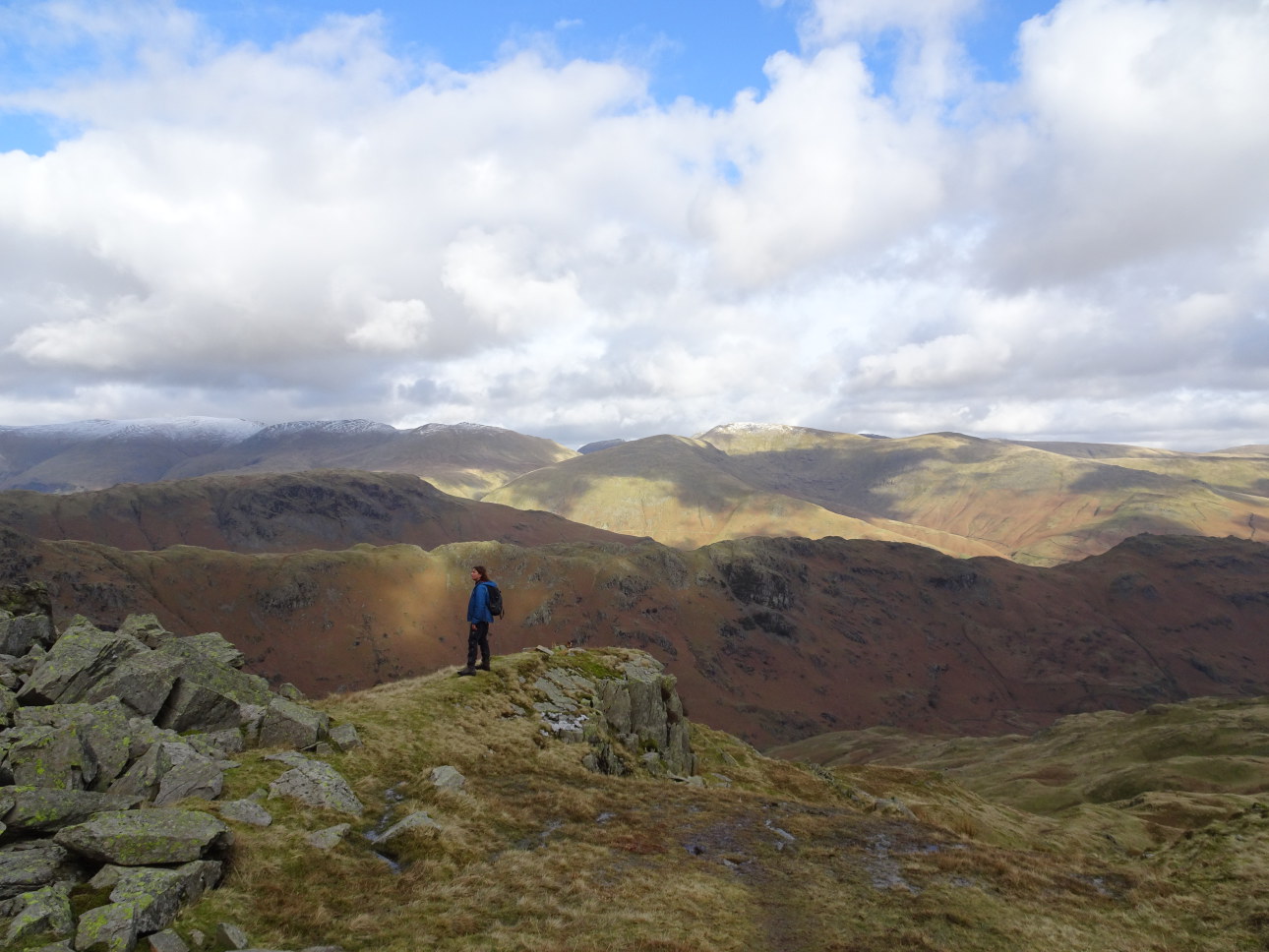 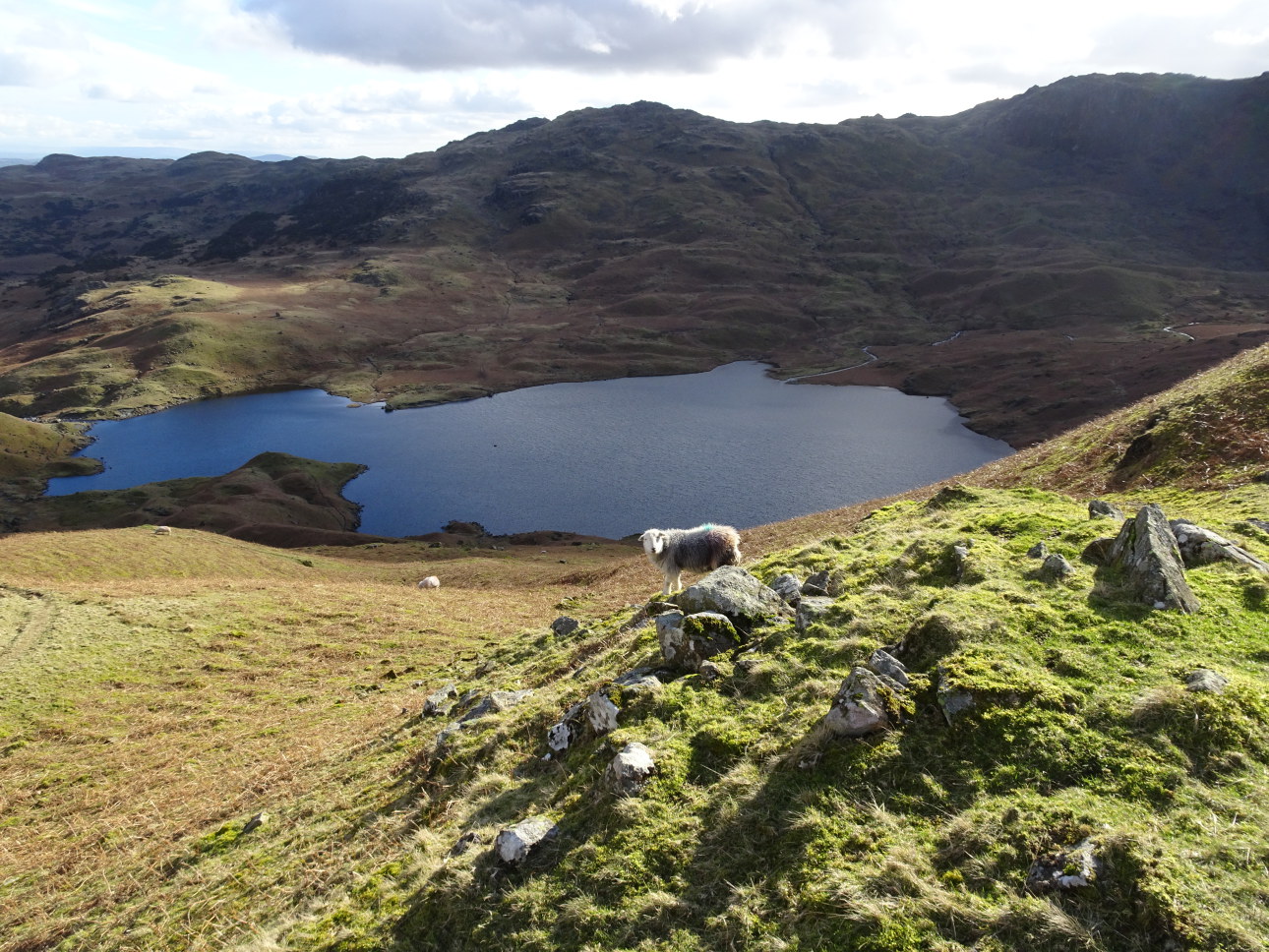 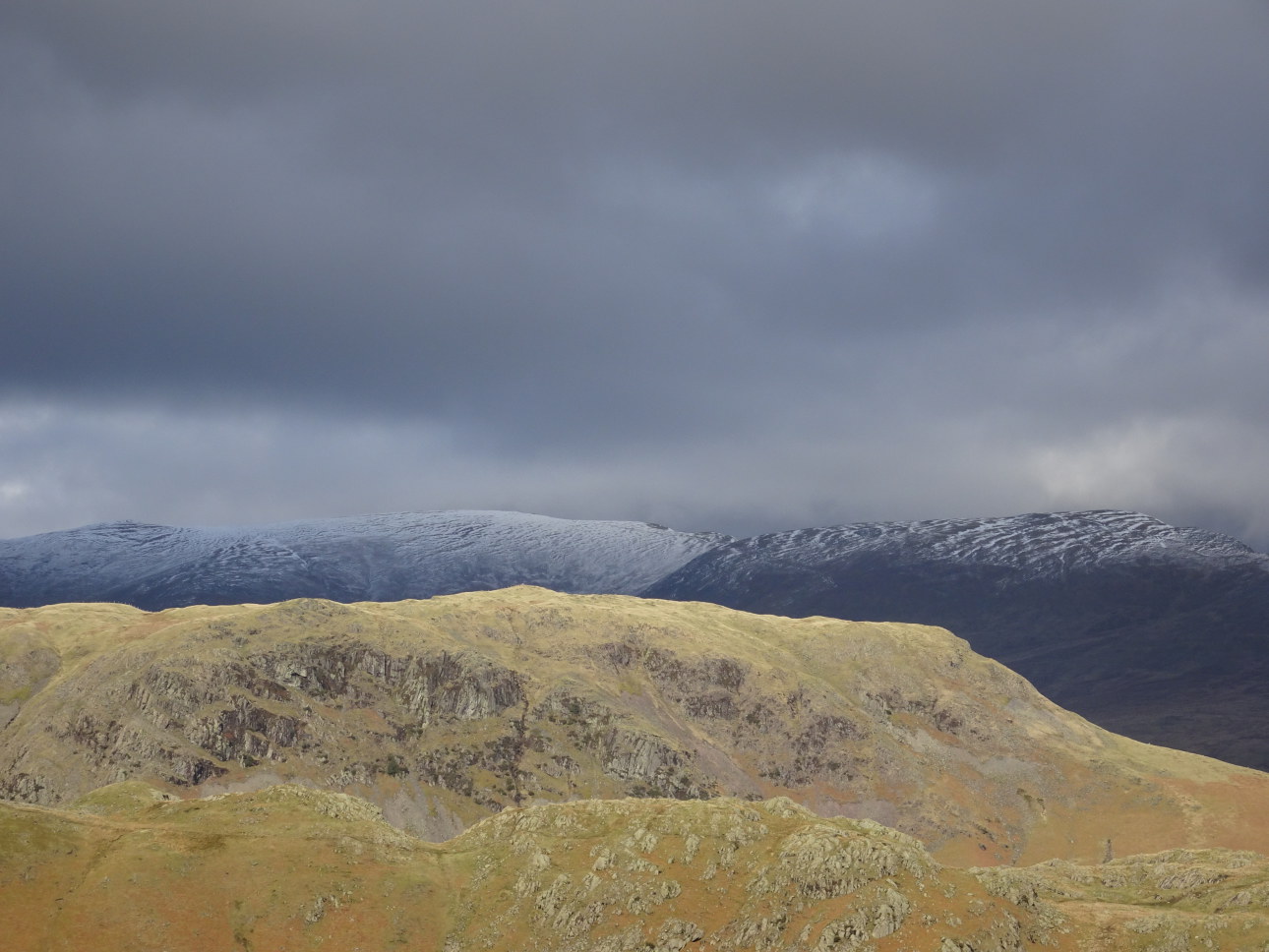 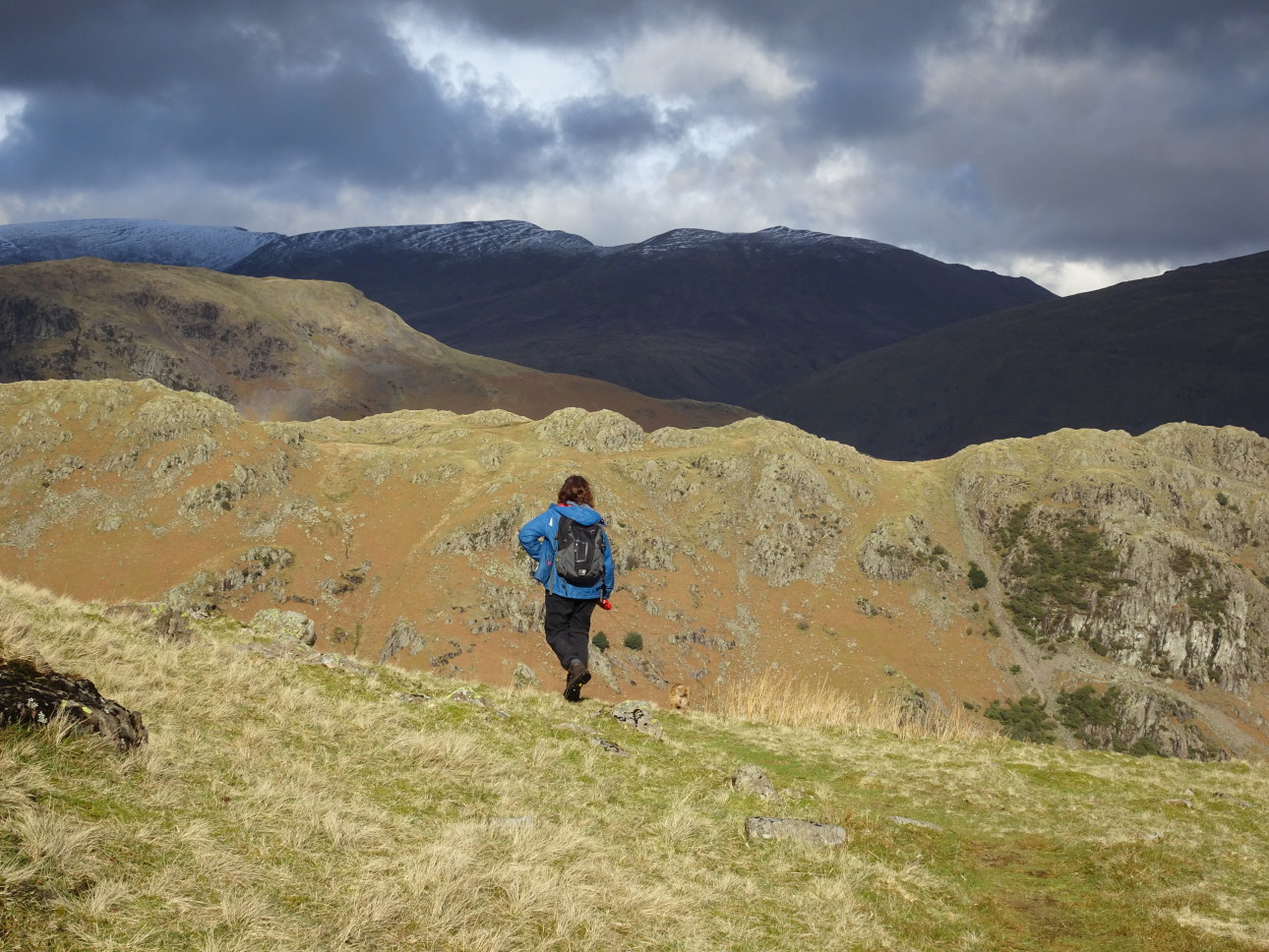 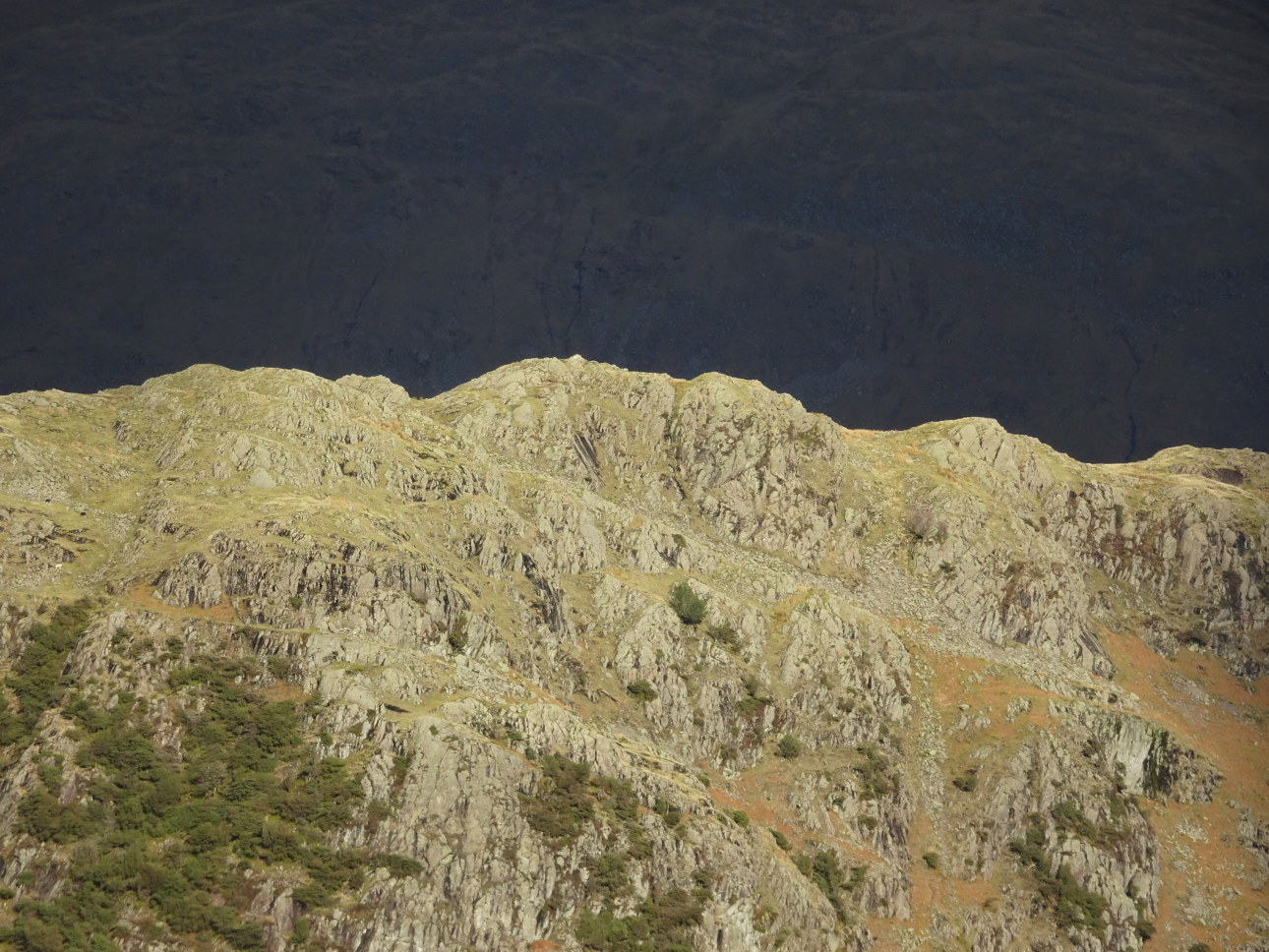 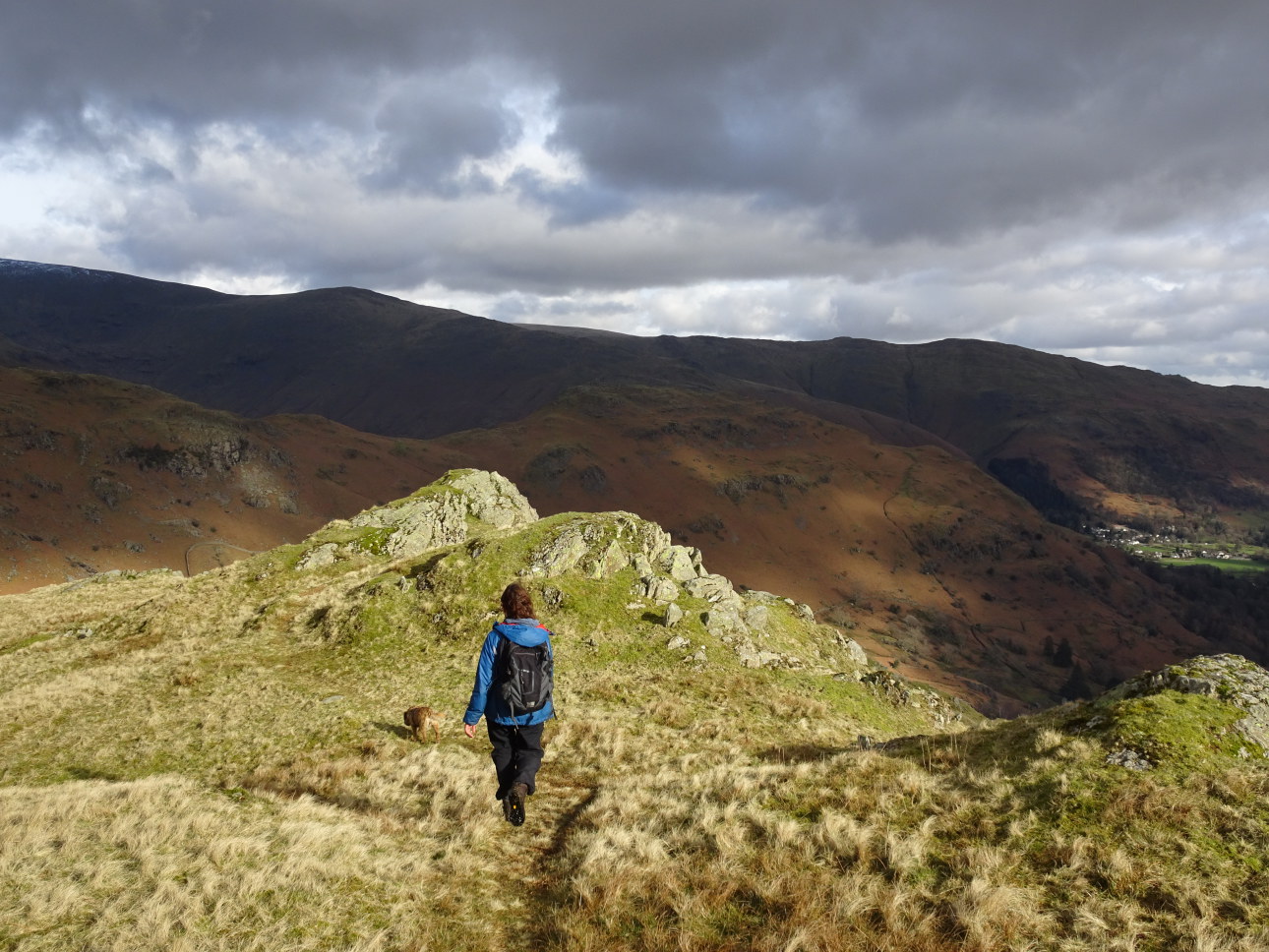 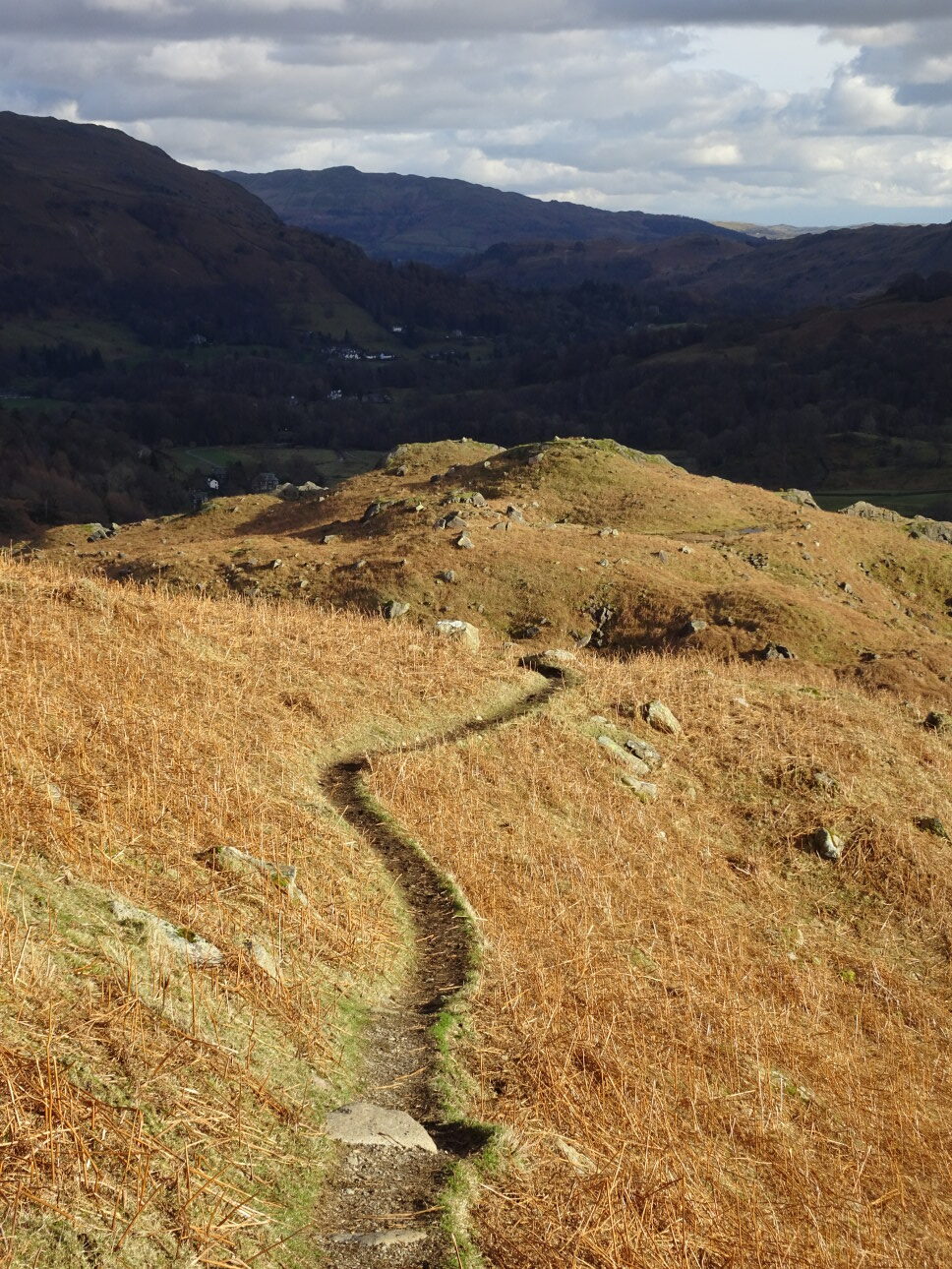 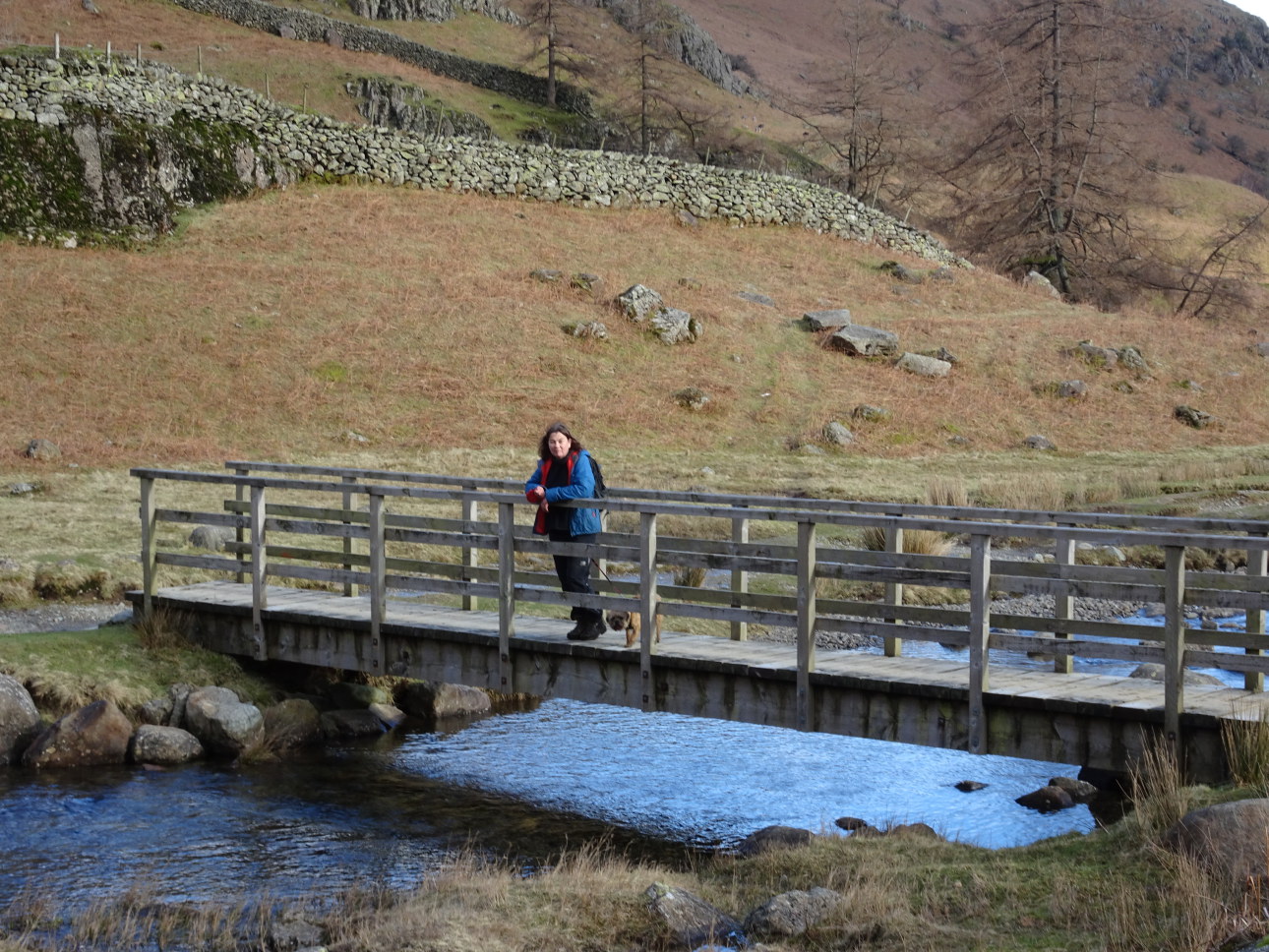 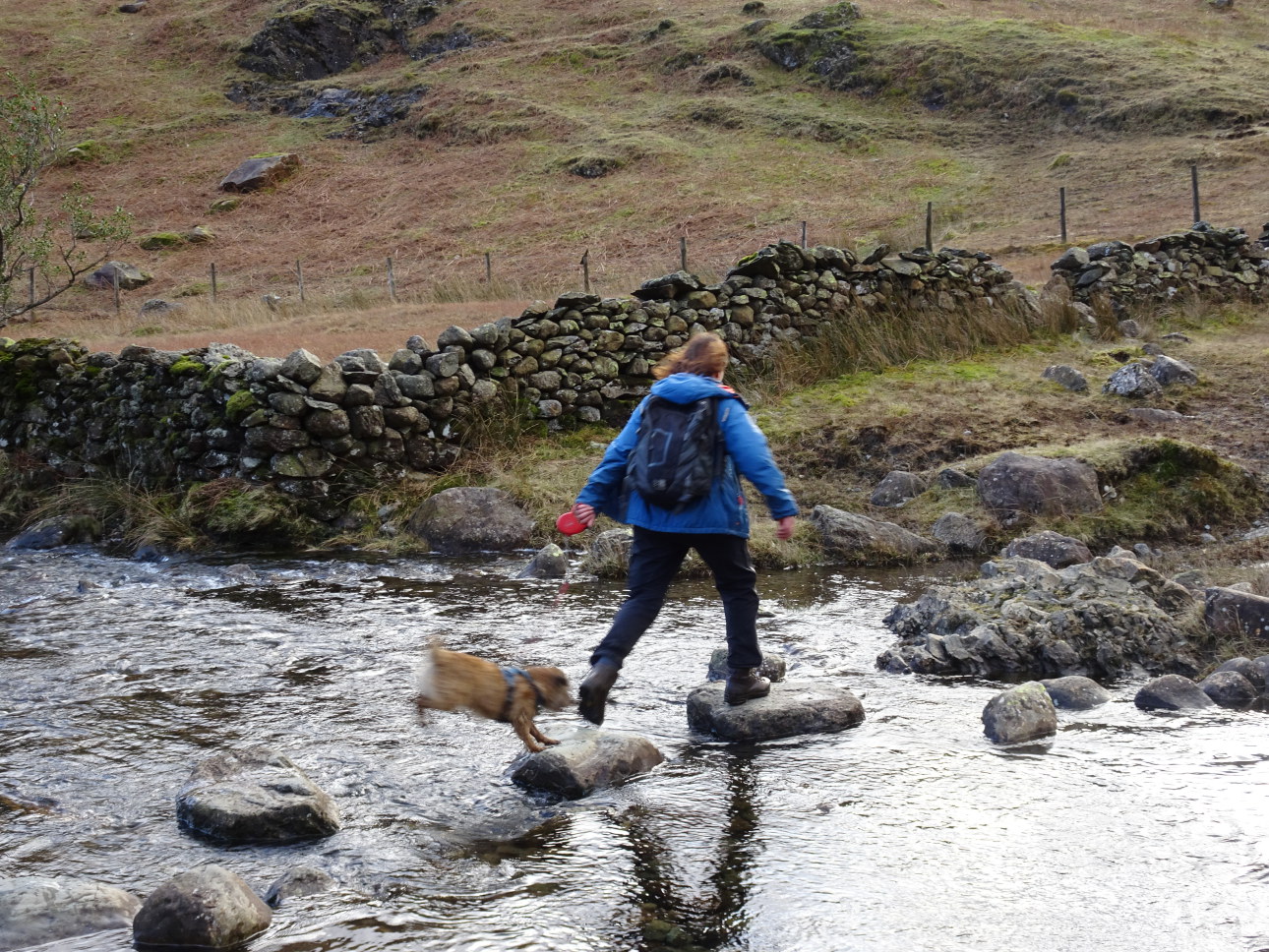 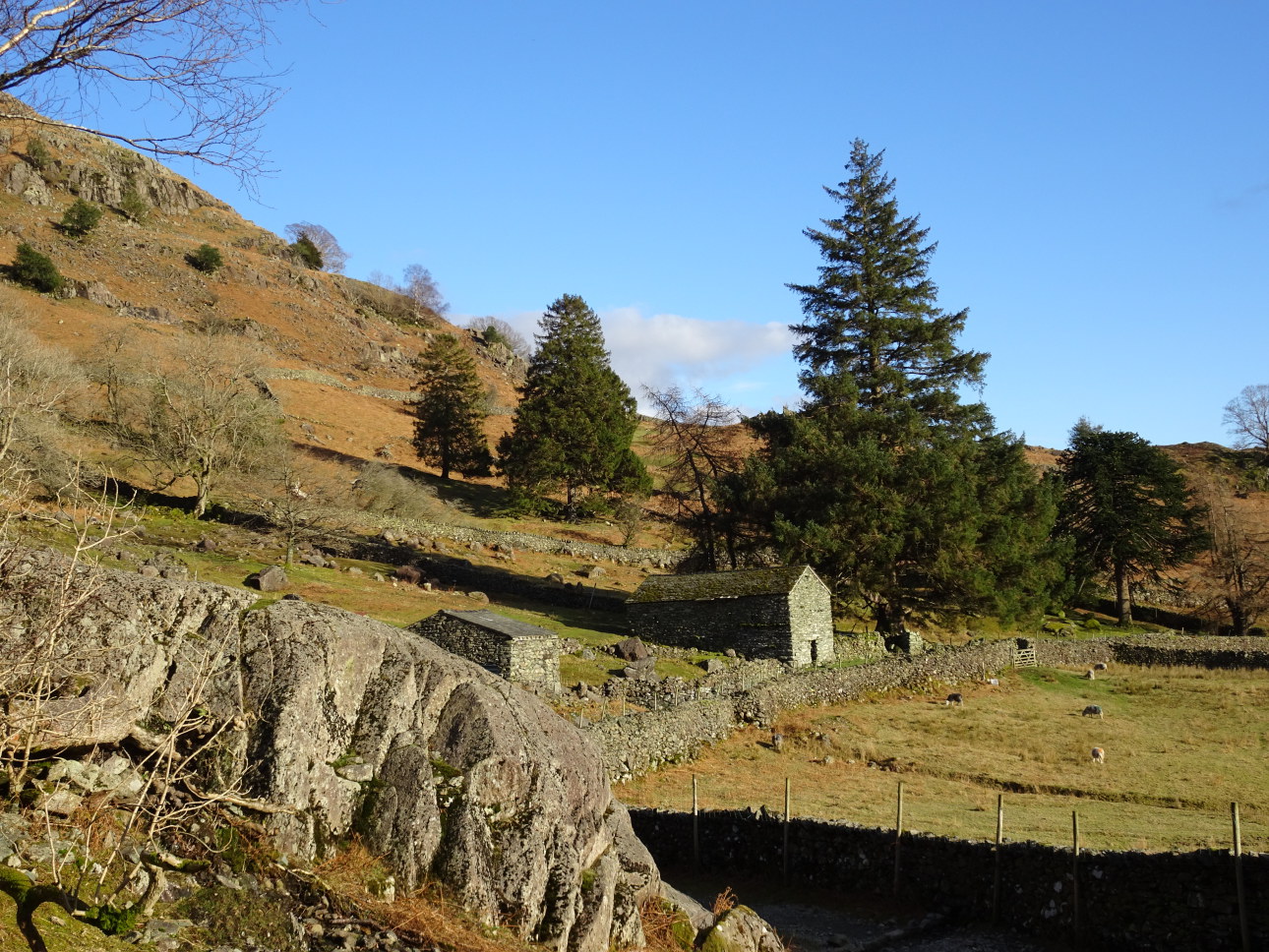 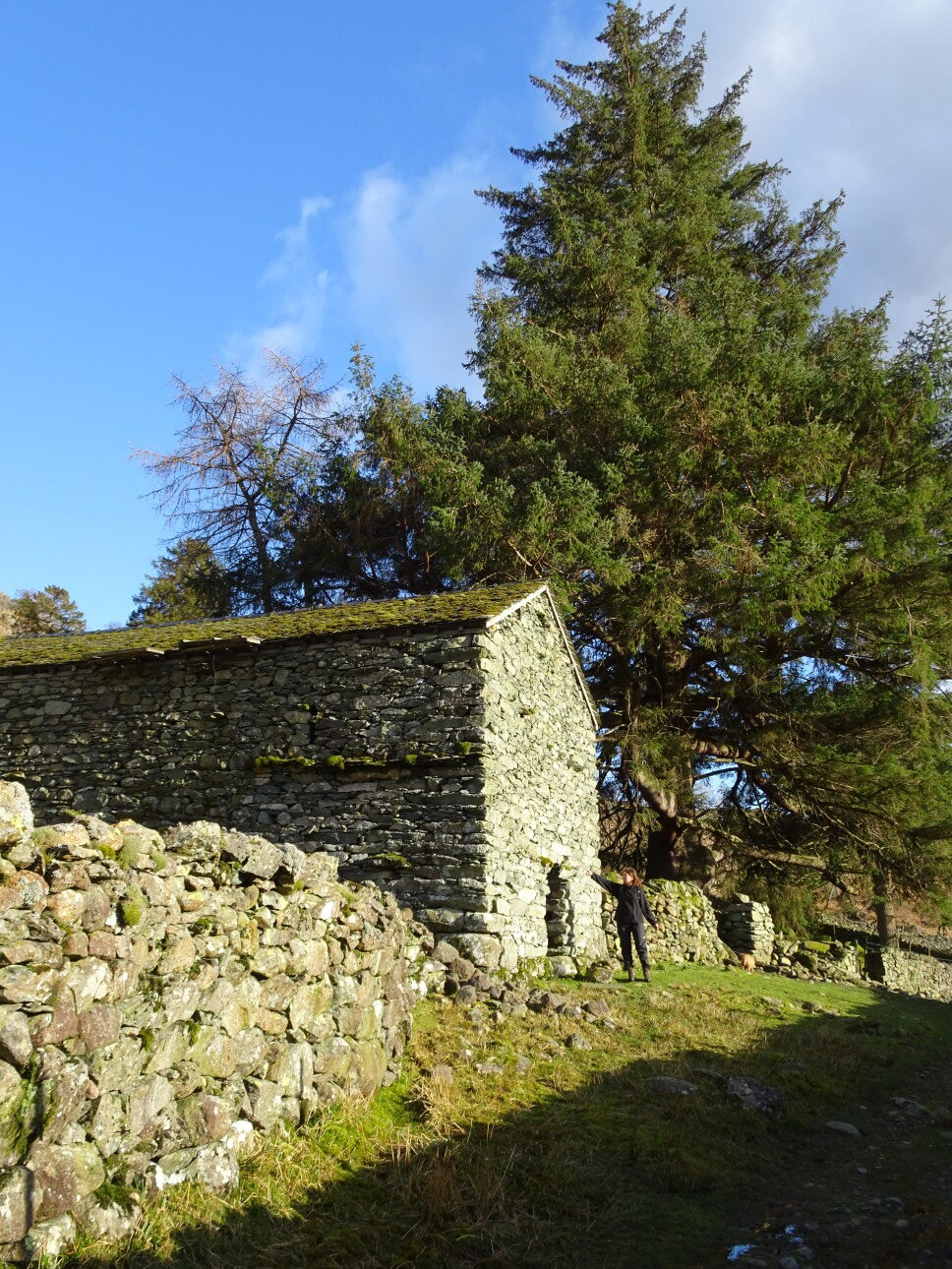 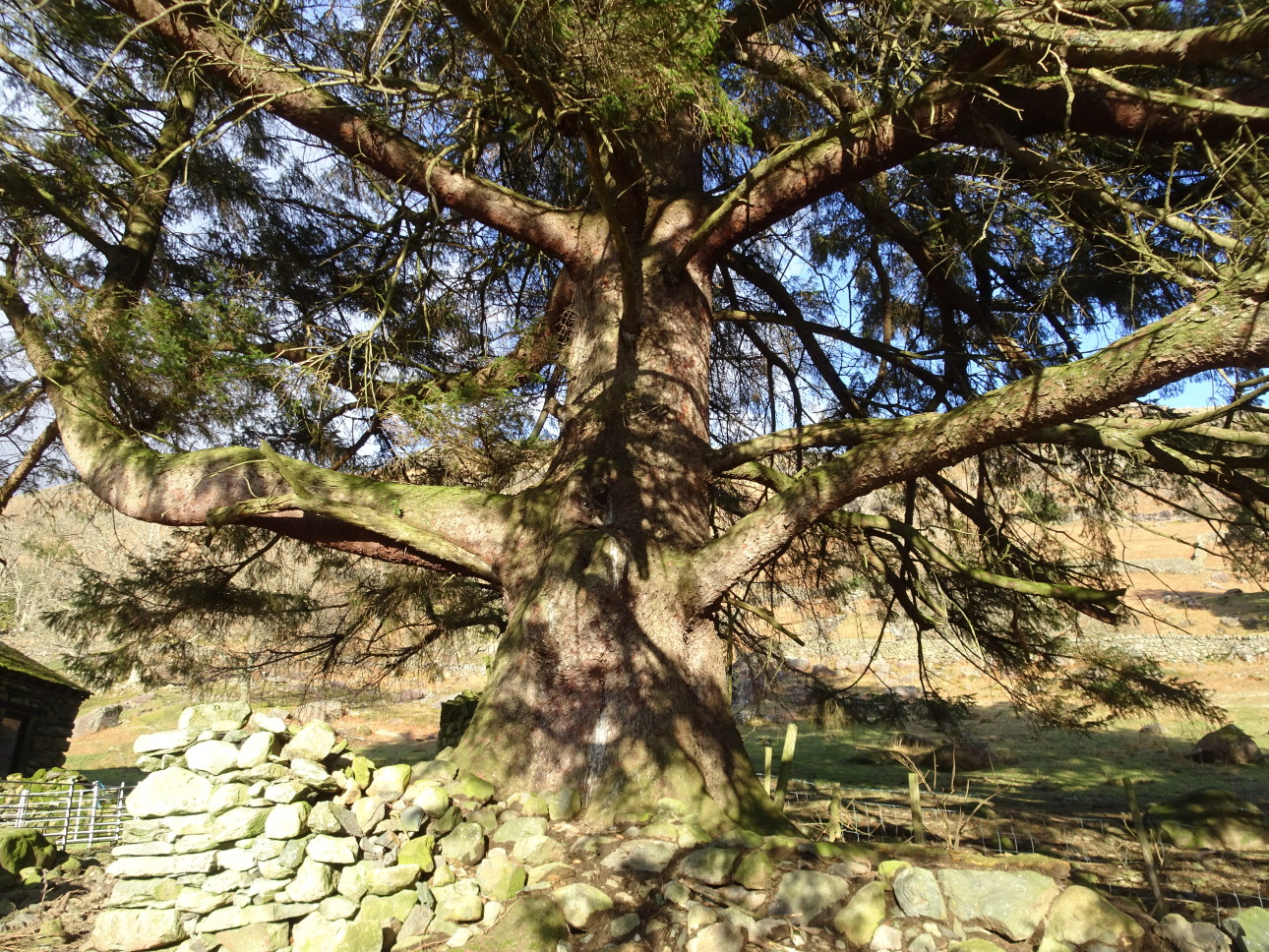 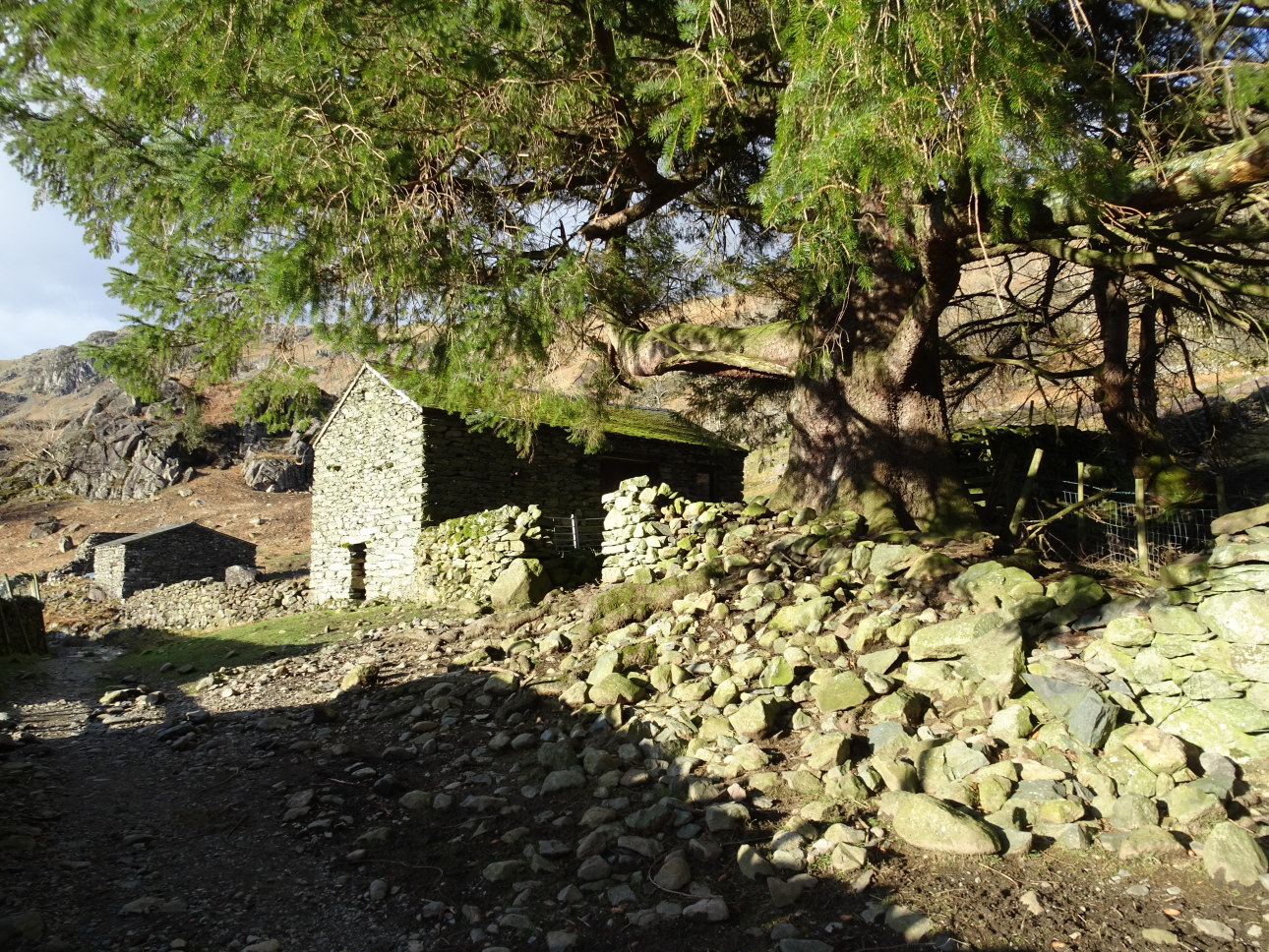 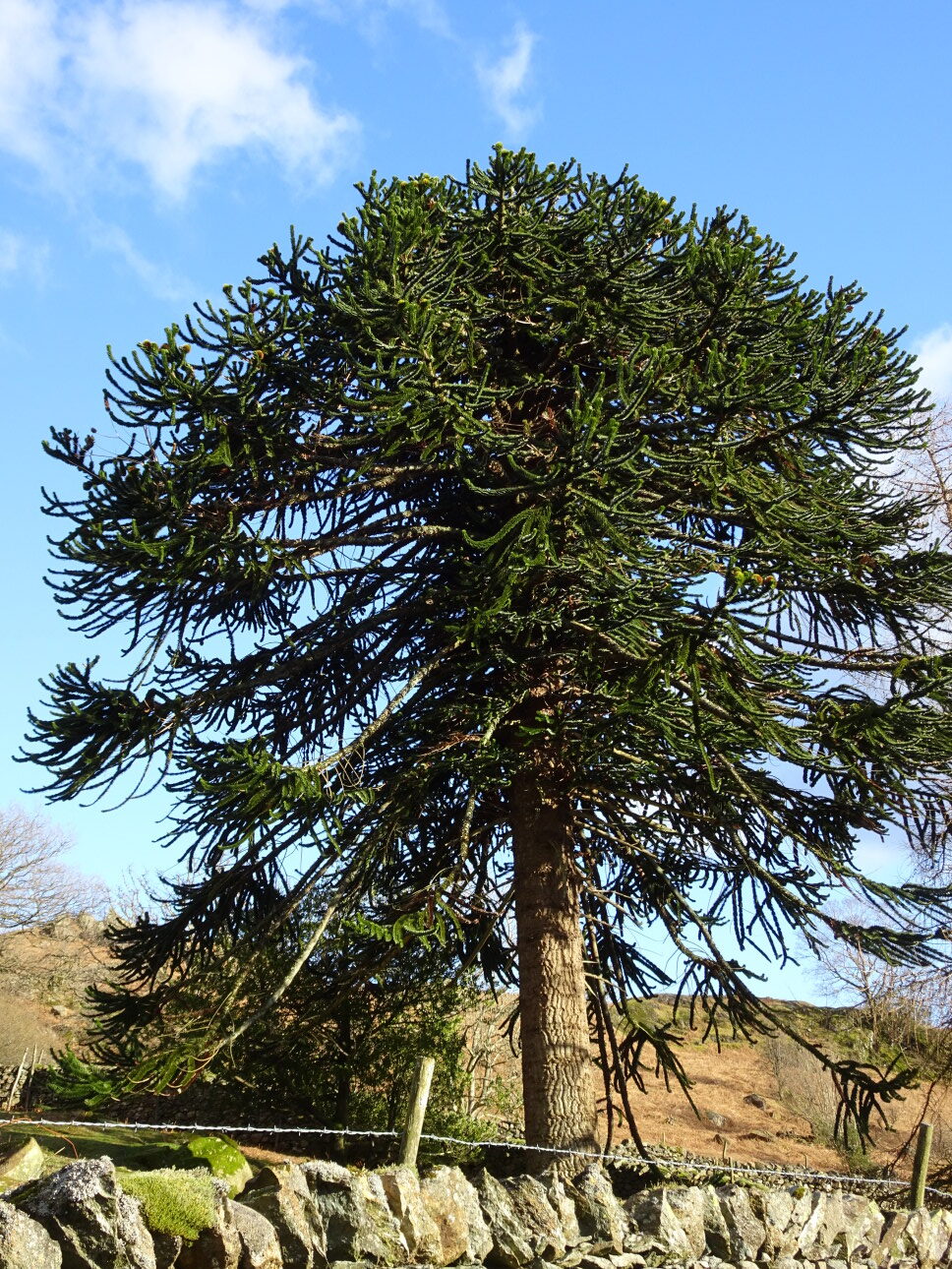 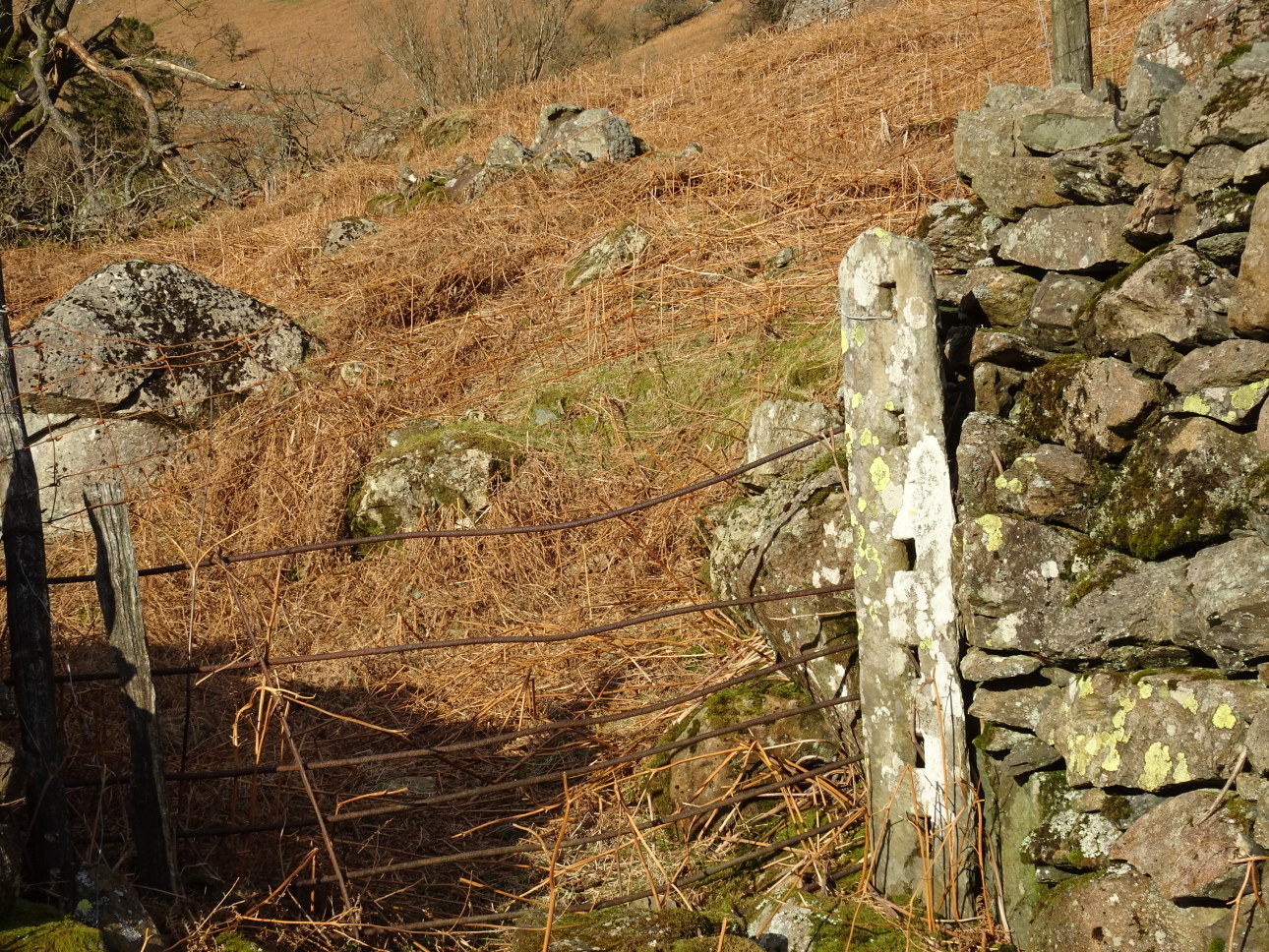