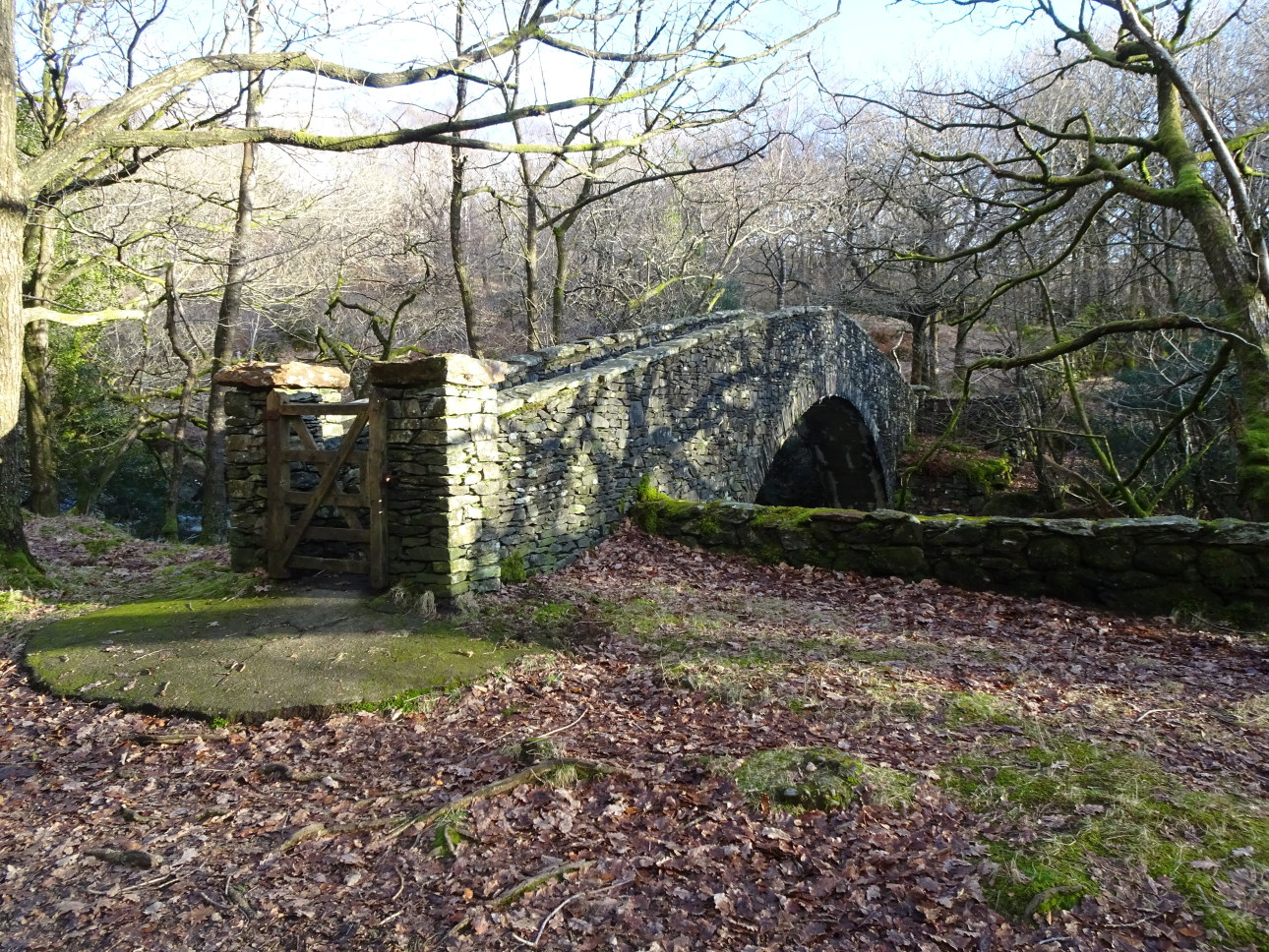 Seathwaite Memorial Bridge or Wallowbarrow Woods Footbridge if you prefer.

I saw a reference to ‘the magic symbol engraved on the Seathwaite Footbridge’ the other day – in the Duddon chapter of Robert Gambles excellent book “The Story Of The Lakeland Dales”. I was instantly intrigued because I thought I knew my footbridges around Seathwaite, having crossed them probably hundreds of times, and never seen any such symbol. So that decided our exercise for the day. The quest to find the magic symbol and complete the walk by way of Wallowbarrow, Grassguards and back down beside the River Duddon through the impressive rift of Wallowbarrow Gorge. This wasn’t a difficult decision because this walk is probably one of the best low level outings in the Duddon, the Lake District, and therefore the World!

The first question was to which footbridge  is  Gambles actually referring. The main footbridge, over the Duddon itself, has a plaque but it is wholly factual  rather than magical. And I suppose this bridge, although unquestionably only a footbridge and often referred to as ehe Seathwaite Memorial  Bridge, is rather a long way from Seathwaite. So could it be the little wooden footbridge over Tarn Beck. A look around its woodwork and supporting stanchions,  eliminated that as a realistic possibility.
So it must be the Memorial Bridge. The plaque on the upstream internal parapet wall west bank didn’t give any clues. So I was a little baffled and about to conduct a more detailed search when Deborah, and her sixth sense for these things, spotted the other two. Sure enough one was definitely magical or masonic looking. An amazing thing, beautifully carved  in slate. The was other was simper, two letters only in a perfectly flat rectangle of slate, but again  it was beautifully carved in a style that matches the easily  seen aforementioned plaque.
Having found them confirmed that Gambles, as usual, was spot on with his information. Though mystery sill remained – what was  the meaning behind these two hidden plaques and indeed behind the visible plaque?  I’m no expert on magic  or masonic symbols and even after consulting with a few people who are, and searching the internet, I was no wiser. How intriguing.  It was Deborah, again, with her museum curator’s expertise, who searched deeper and found the answer which had been posted by the Duddon Archeological Group (a remarkable body of enthusiasts who have done much to trace the Duddon’s rich past history stretching back into pre-history).

The captions  to the photographs tell all – apart from the actual locations of the two ‘hidden plaques”. So find them for yourself, it’s more fun, but mums the word – keep it a secret! 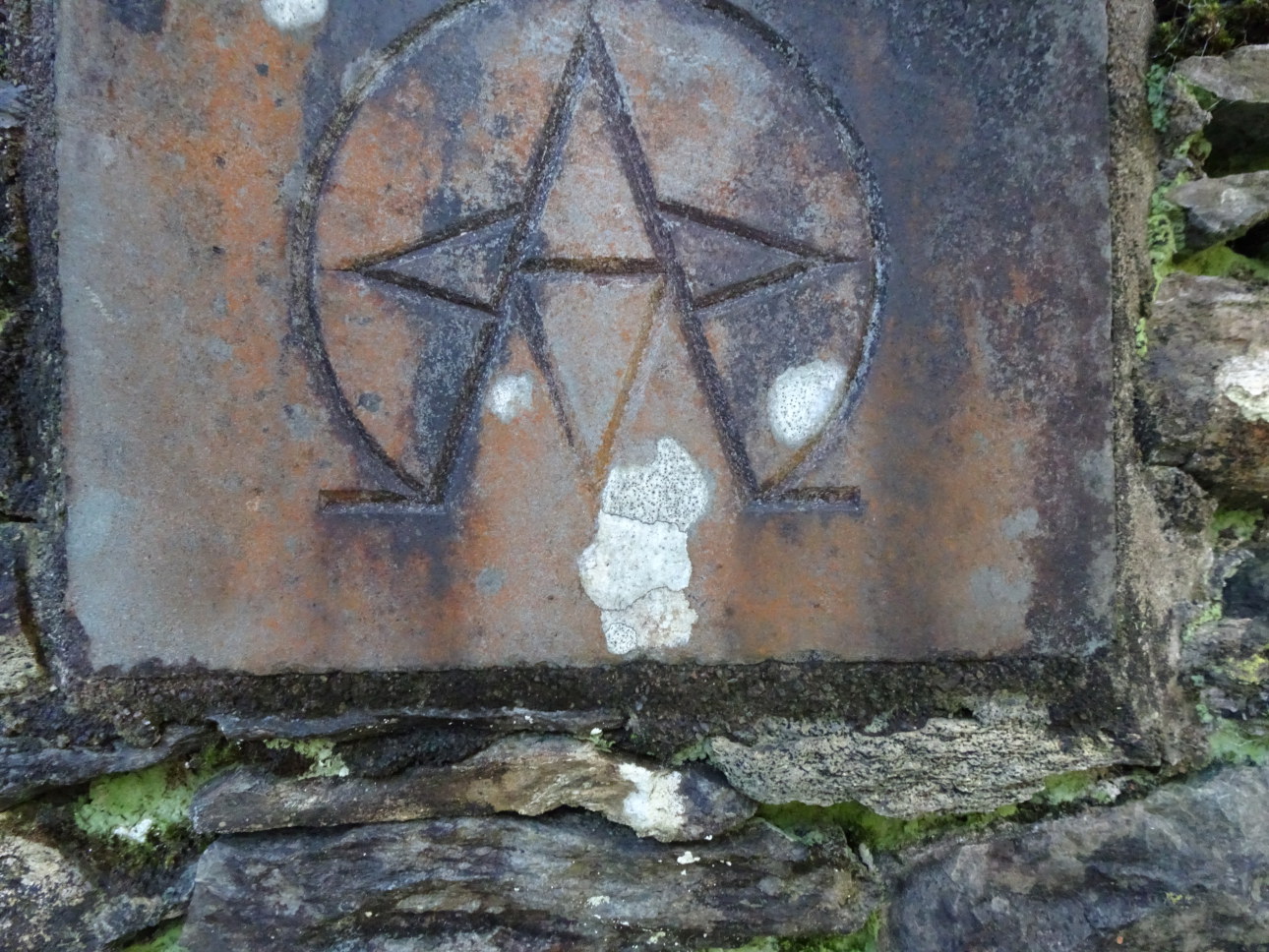 One hidden plaque is engraved with ‘the magic symbol engraved on the Seathwaite Footbridge’. It actually translates thus: the Greek letters alpha and omega are intertwined with a star which represent the initials of Aida (Deborah) Borchgrevink – her maiden name was Starr. 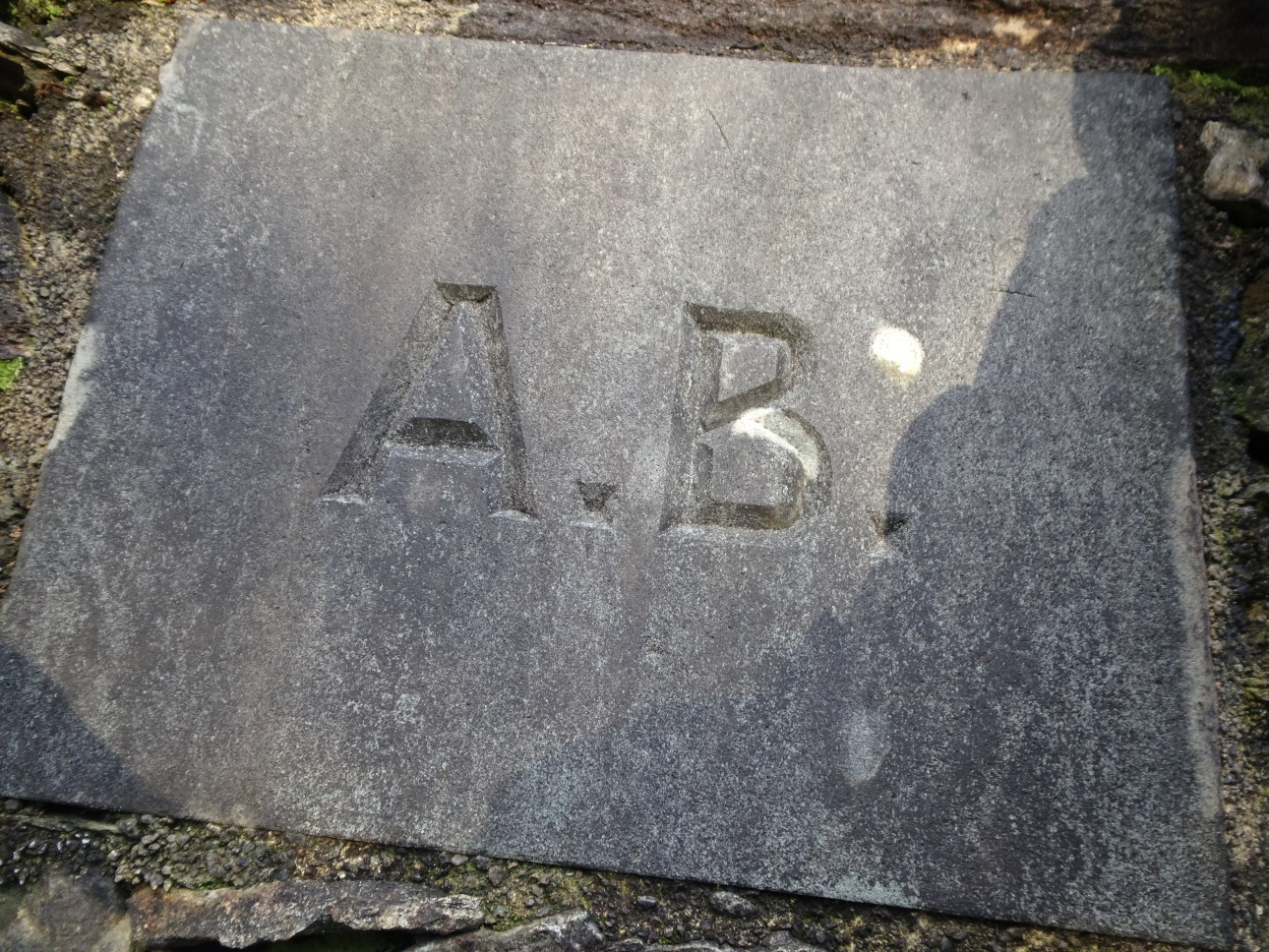 The other hidden plaque has Aida’s initials (AB). The bridge was built in memory of Aida Borchgrevink – an opera singer and sometime resident of the valley in the early years of the last century. She was born Aida Starr in Ohio in 1861 and died in 1931 and was someone memorable enough to have a bridge fashioned in her name. She obviously lived an intriguing life and was fortunate enough to reside in this most magical of all Lakeland Valleys – wouldn’t it be great to know more about this person. 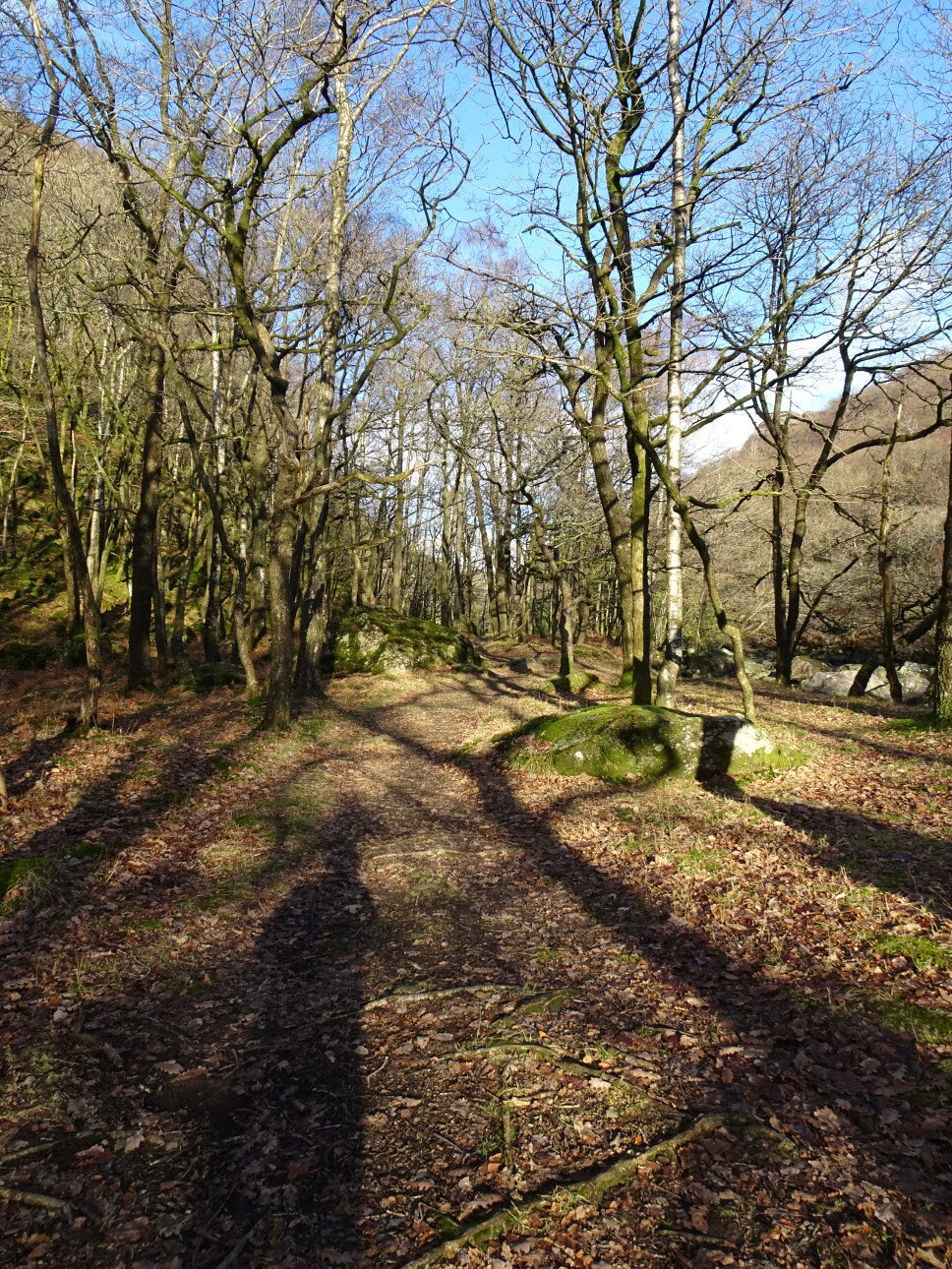 Wallowbarrow Woods west of the bridge – here lies the real magic. I once wrote; ‘If there be elves, they live here, in these woods’. 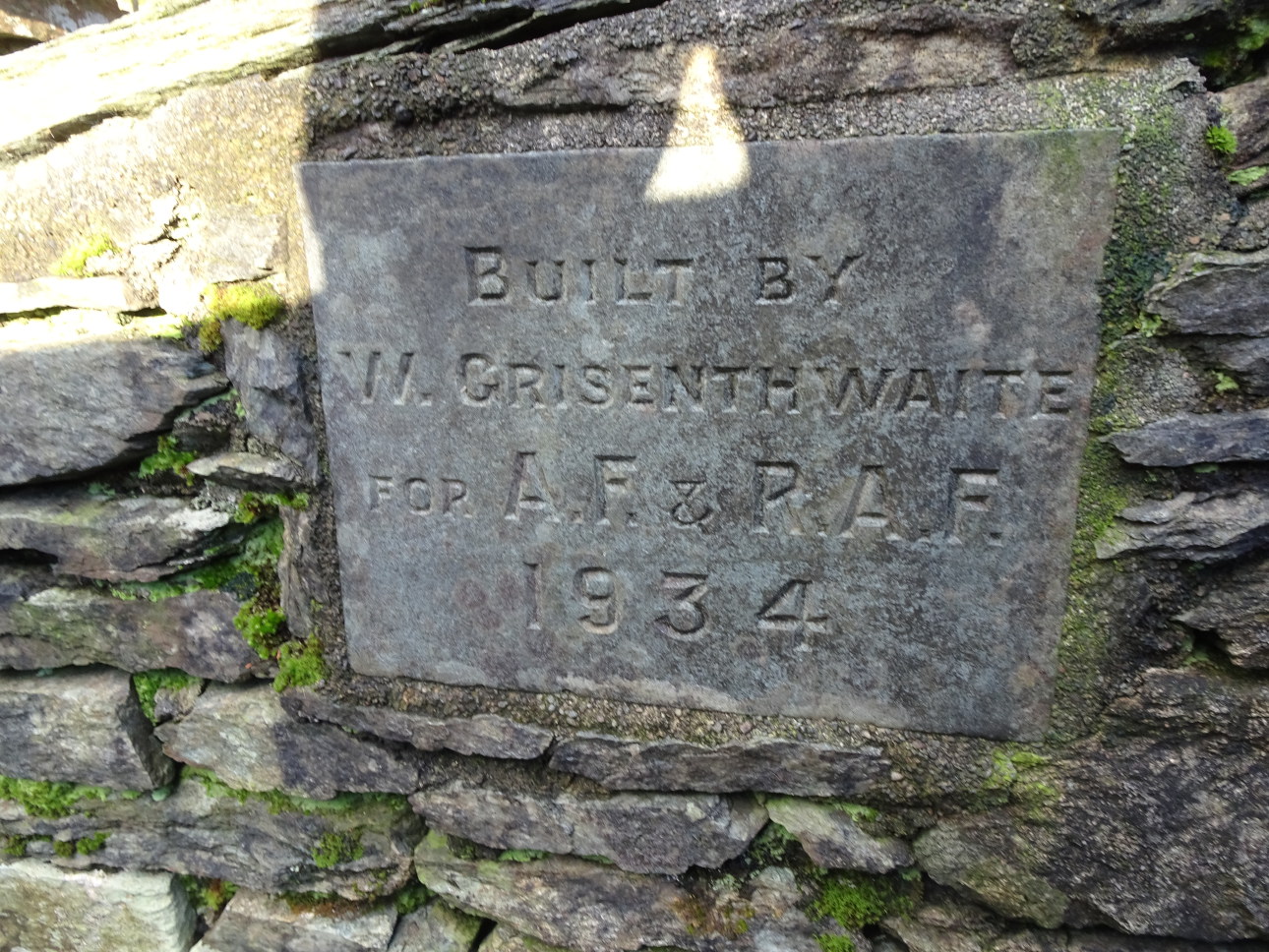 The visible plaque telling that the Seathwaite Memorial Bridge was built by W Grisenthwaite for AF (Aida’s daughter – Aida Louise Borchgreink) and R A F (presumed to be Aida’s son in law). It is thought that Grisenthwaite was a monumental mason from Penrith who also did the similarly styled high quality carving.

I look out to Grasmere’s Helm Crag from my bedroom window – lucky me. The thing is I really do appreciate it. Every day is different but I get a particular buzz when I open the curtains in the morning and the fell has been transformed by the first heavy snows of winter. Helm Crag looks like it’s wearing a suit of shining white armour. All except for the scattering of steep crags and coxcomb ridge of rocky spikes that is. These stand stark black against the white because, under most conditions, they are too steep to hold the snow.

On this day much of initial snow covering had disappeared from the lower heights. Apart from smears of ice and patches of snow the colours, of rust red bracken and green grass prevailed, contrasting vividly with the still white shining domes of the higher fells. These heights being Helvellyn, Seat Sandal and  Fairfield to the west, Tarn Crag, Codale Head and Ullscarf to the east. 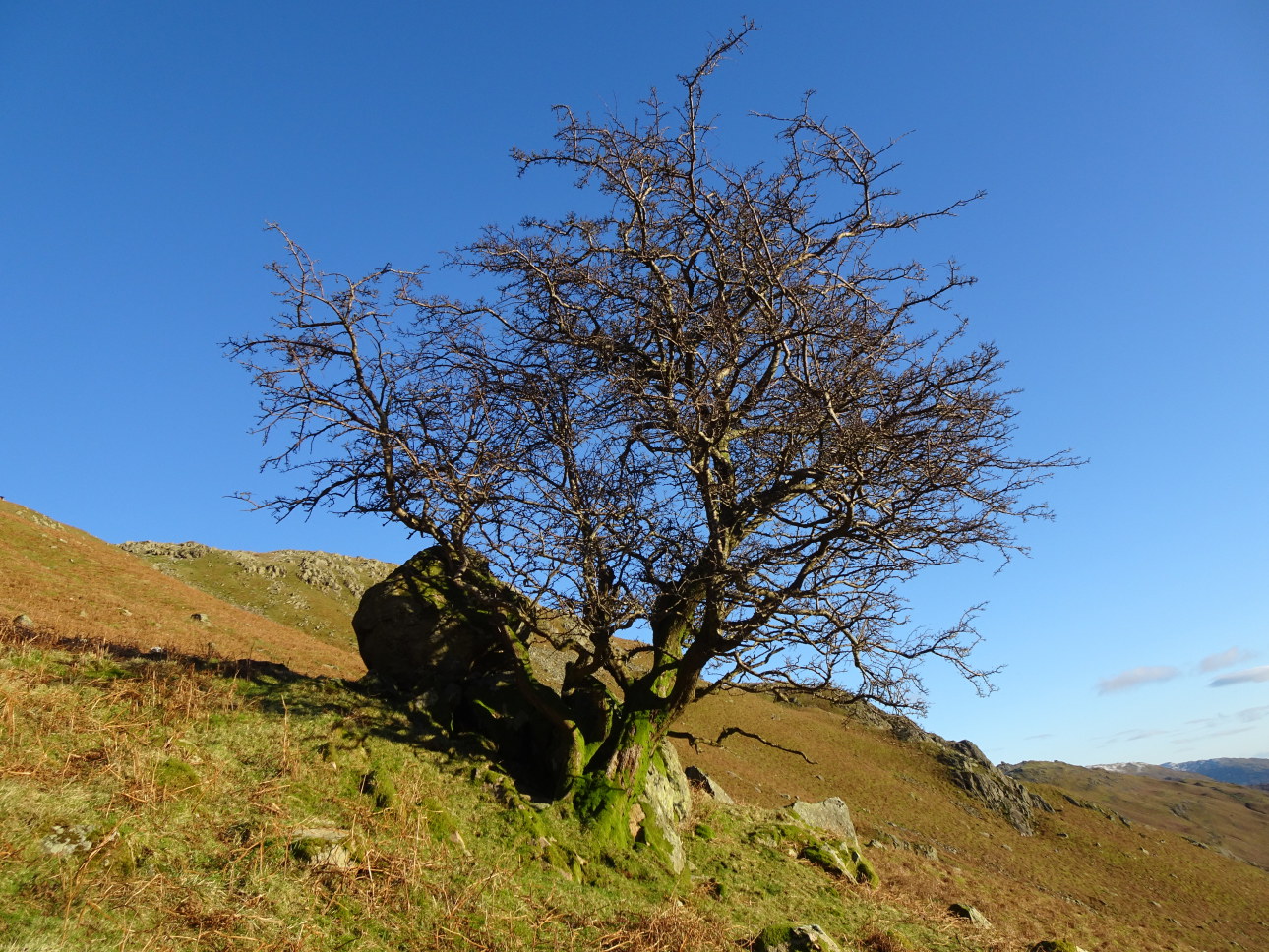 Descending into Far Easedale – which came first the magical Hawthorn bush or the boulder?
Taken at 3:12pm. 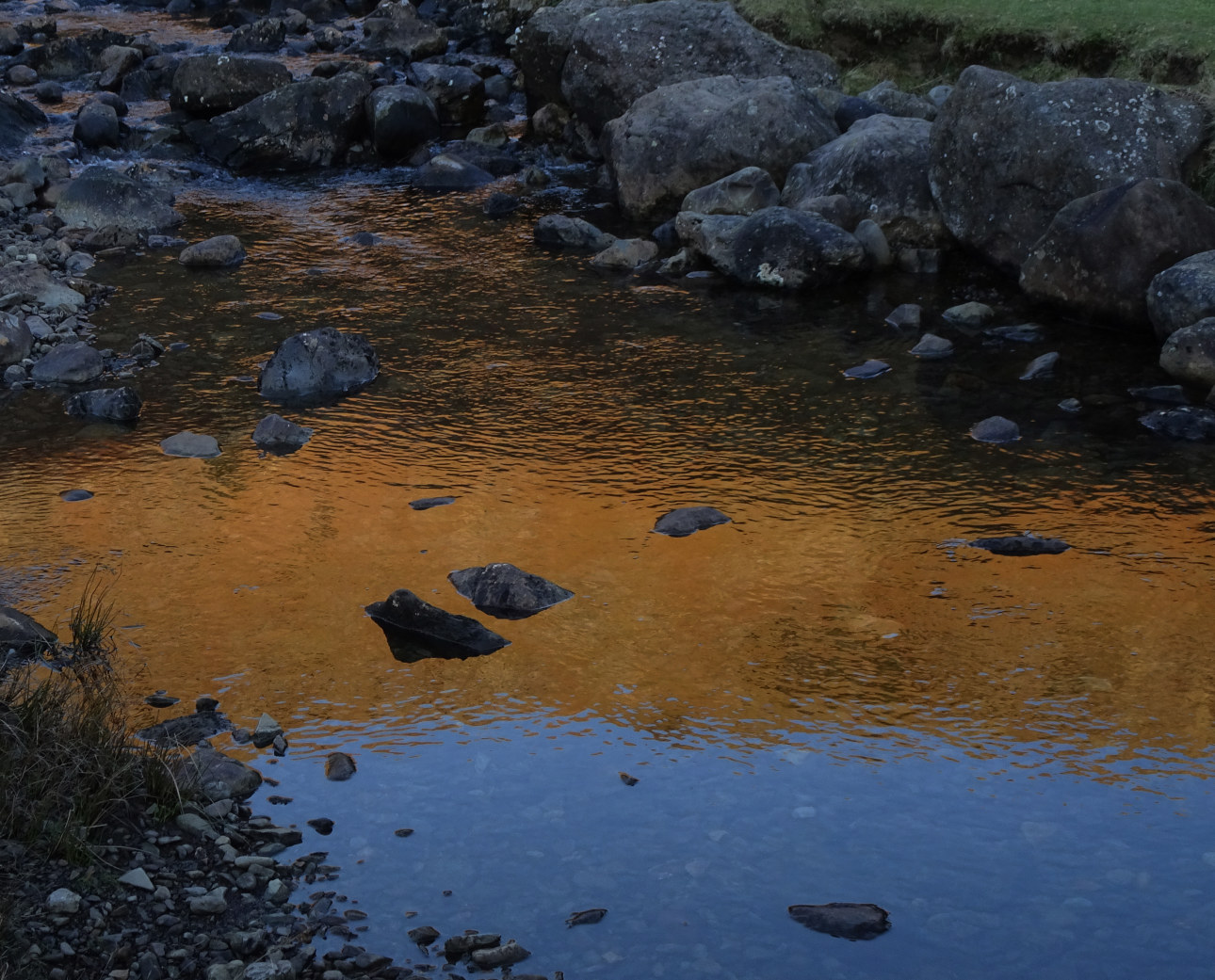 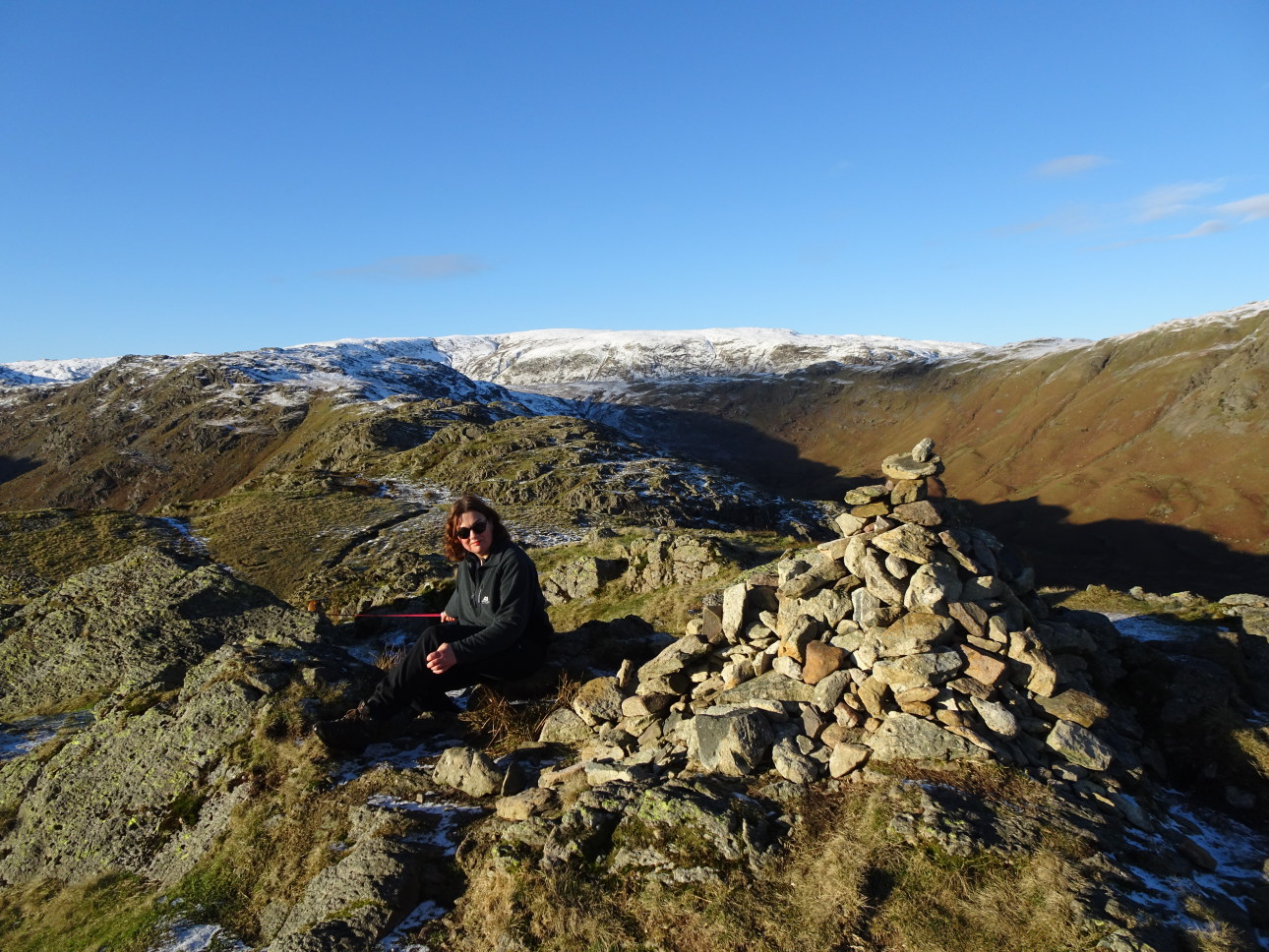 Deborah by the summit cairn of Gibson Knot – Ullscarf seen beyond.
Taken at 2:38pm. 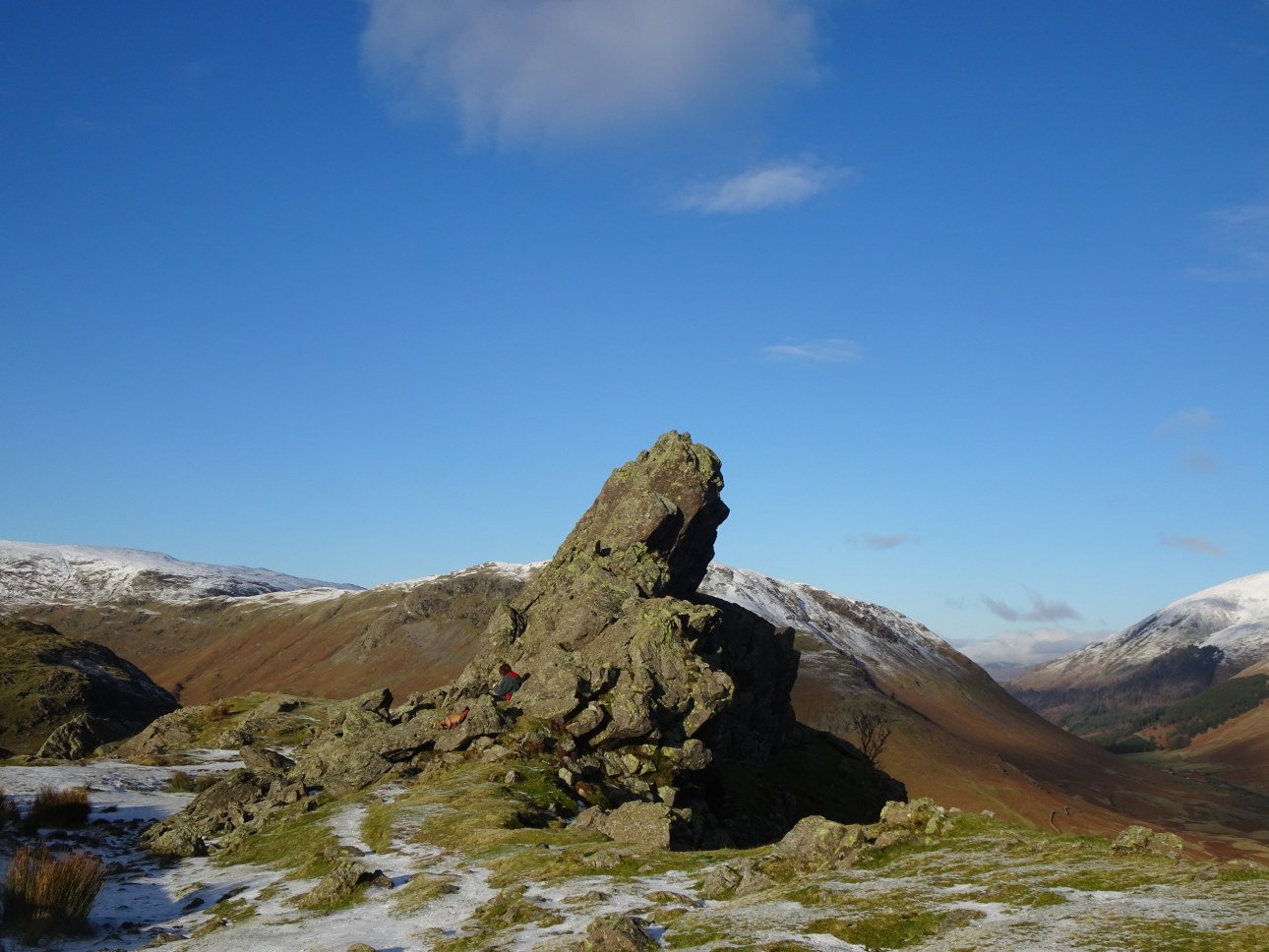 Looking to the ‘2nd’ Lion Lamb formation – see “THE GRASMERE YEARBOOK” for clarification. Dunmail Raise to the ,right.
Taken at 1:46pm 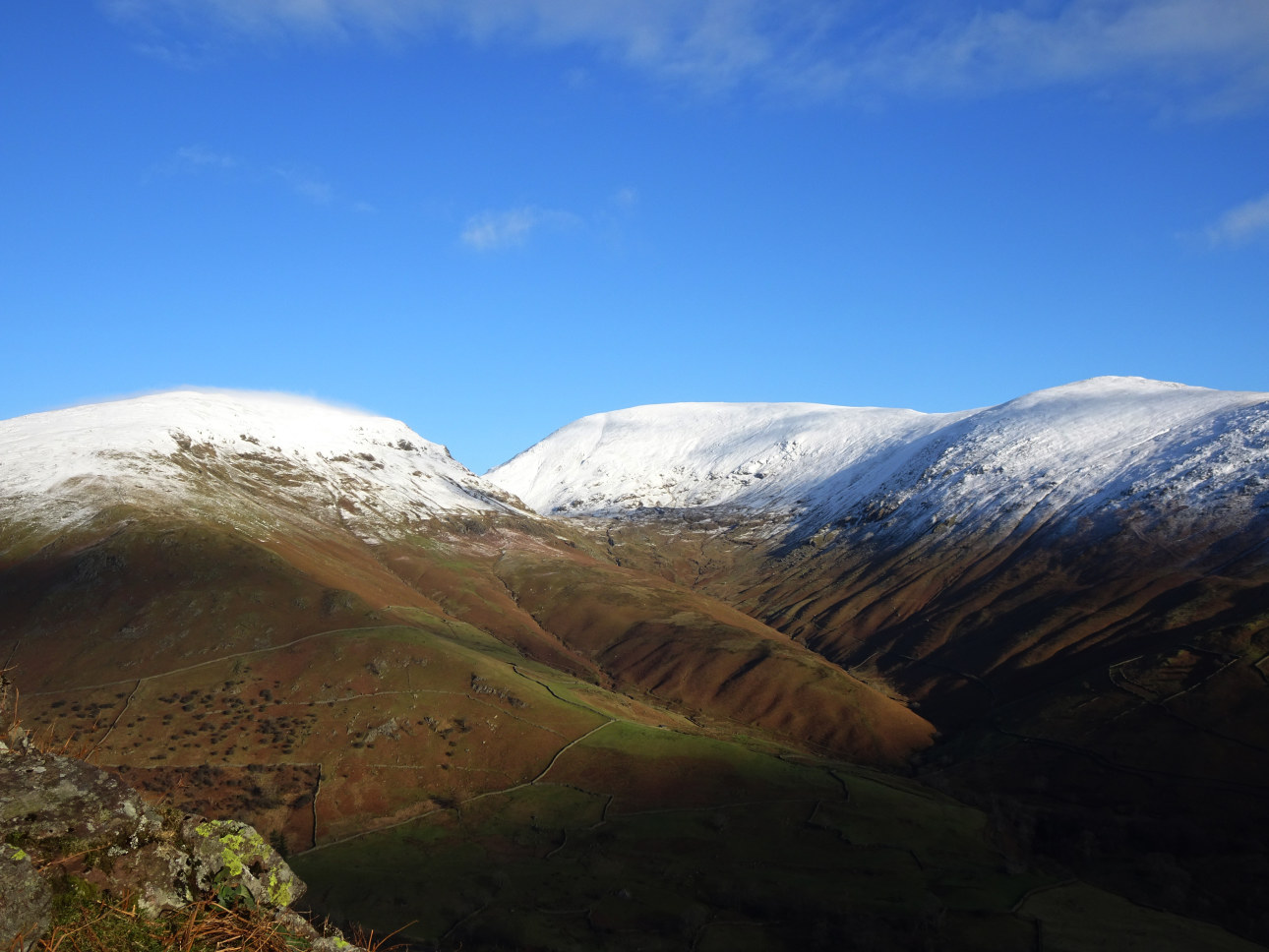 Looking from the nose of Helm Crag east to Seat Sandal, left, and Fairfield, right.
Taken at 1:28pm. 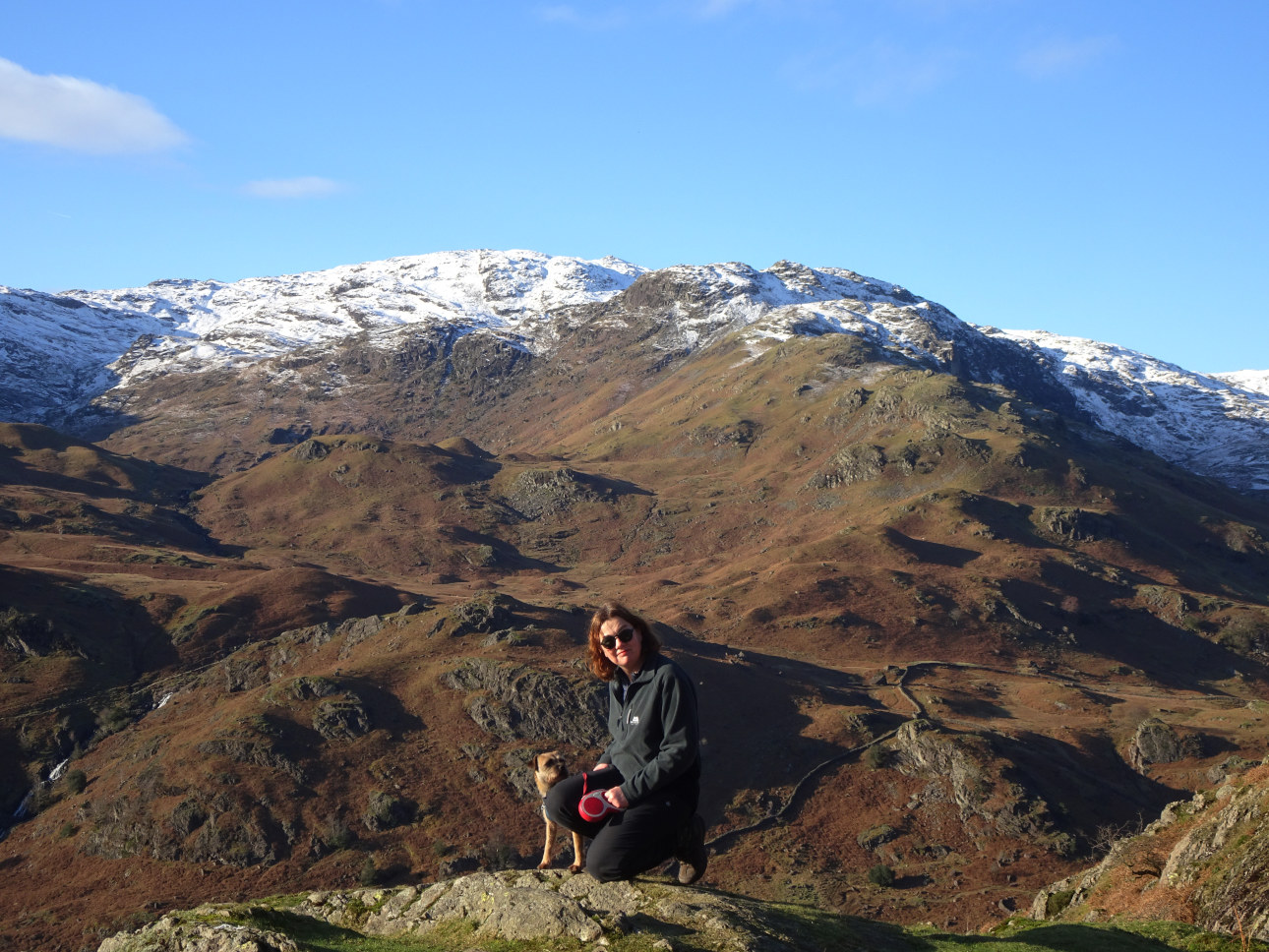 Deborah by the summit cairn of Gibson Knot – Ullscarf seen beyond.
Taken at 2:38pm.

We use cookies to ensure that we give you the best experience on our website. If you continue to use this site we will assume that you are happy with it.Ok